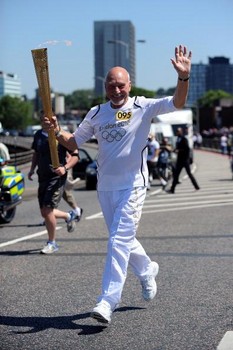 The Olympic Torch has “gone where no one has gone before.”

Sir Patrick Stewart carried the torch in a relay yesterday in preparation for the upcoming London Olympic games.    He carried it through Croydon Monday afternoon.

The torch relay is on its final leg of a 70-day journey, touring the neighborhoods of host city London before being taken to the Olympic Stadium for Friday’s opening ceremony.

“Never mind Jean-Luc Picard,” said Stewart, after his run. “I have attended world premieres of big movies that have not had the excitement and the sense of pleasure and pride that people are exhibiting today…It was thrilling. I shall never forget today!”