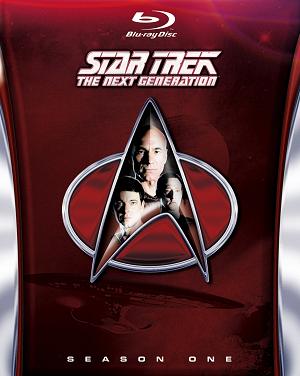 Looking back twenty-five years later, it’s hard to believe that Star Trek: The Next Generation wasn’t always going to be “sure fire” hit. Hindsight and four spin-off series later, it’s easy to forget that Paramount and Gene Roddenberry gambled in a big way with the first ever Star Trek spin-off. Not only did the next Star Trek completely reset the franchise with a new cast of characters on a new starship Enterprise, but it was set close to 80 years later, leaving little opportunity to cameos by classic Trek characters should things go horribly wrong and some stunt guest-casting was required.

But the bigger risk was on the part of Paramount, who decided to bypass the traditional network model for new series and instead offer the series to local stations in first-run syndication. (Ironically, those first few years a lot of casual fans assumed the show aired on Fox since Next Generation aired on a lot of local Fox affiliates). The model had worked for lower-budget first-run comedies, but it could have been a disaster for Paramount had Next Generation not proved a hit out of the gate.

Looking back, the appetite for new Star Trek was strong enough to sustain the show over a rocky first couple of seasons. And now as the series celebrates twenty-five years, Paramount and CBS Digital have upgraded and re-mastered the entire run of Next Generation for Blu-Ray.

It also opens up the eternal question that many Trek fans wrestle with–should I buy the first season of Next Generation on the new format? After all, it’s not exactly the best season of the show.

Sure, you could wait until season three comes out, but you’d miss out on a couple of things that make the earliest season of Next Generation worth collecting (and not just if you’re a completist like me). We’ve come up with seven reasons to pick up Next Generation when it hits Blu-Ray next week (and none of them will be–wow, it looks and sounds better than ever before. If the work done on the sample Blu-Ray released last year is any indication, the “wow” factor is a given.)

1. The Highs and the Lows
Season one of Next Generation is wildly inconsistent. A lot of this can be chalked up to the behind the scenes turmoil and what was described as a “revolving door” at script-editor. That led to such lows as the second episode ever, “The Naked Now” being nothing more than a rehash of the classic Trek’s “The Naked Time” and the universally panned “Justice” that promised us the death of Wesley Crusher but couldn’t deliver. (On the plus side–really skimpy native outfits that should look great on Blu-Ray…I’m just sayin’…) Tuning in each week, you were never quite sure what you were going to get, but it was always interesting. There were some nice moments to season one when you can see a glimmer of things to come–examples include “1001001,” “Conspiracy” and “Where No One Has Gone Before.”

2. Re-Capture The Excitement
It’s probably hard for fans of a certain age to recall just how exciting it was that Next Generation was coming on. After years of only have 79 original episodes and a couple of movies to satiate our Trek appetite, the idea that we’d get next Star Trek on a weekly basis was mind-boggling. As the franchise is fond of saying, “There are always possibilities…” and that was no where more true than with Next Gen. OK, sure the first ten or so episodes are fairly flat and not much to write home about–but in 1987, it was new Star Trek on our screens every week!  If you’re old enough to recall the time when Next Gen premiered, the Blu-Ray set could help you recall just how cool this was when it first aired.

3. The Klingon arc begins here.
Next Generation isn’t exactly the most arc-driven show. Oh sure, you’ll get the occasional two part story and there are some trends to episodes centering on a certain character (for example, most Riker stories center on his questioning the reality of a situation in some way), but for the most part there aren’t any heavy arc stories like we got on Babylon Five or Battlestar Galactica. One big exception is stories about Worf and his relationship with the Klingon Empire–and that storyline lays its foundation here in season one. Our first real exploration of the Klingons comes in “Heart of Glory.” While not exactly as eye-opening or world-building as we’ll later see, the storyline gels the character of Worf and sets the seeds for things to come in later seasons.

4. Saucer Seperation
To set Next Generation apart from classic Trek, Roddenberry dreamed up the idea that the Enterprise could become two separate ships in the event of an emergency or really kick-ass space battle. Unfortunately, the concept proved to be far more exciting than the actual reality and it was only used three times during Next Generation’s seven year run. (To this day, the fourteen-year old who first watched “Encounter at Farpoint” all those years ago thinks this is one of the greatest ideas in the history of television). And two of those moments are here in season one in the aforementioned “Farpoint” and “Arsenal of Freedom.” Nether one features what’d you call a “kick-ass” space battle but there was always the hope we’d get one. (We eventually did in “Best of Both Worlds, Part 2”)

5. A Main Character Dies
SPOILER warning–a major character shuffles off this mortal coil in season one. Denise Crosby decided that one season of playing head of security Tasha Yar was enough and that she wanted to leave the show in a big way. That led to Tasha dying in “Skin of Evil” at the the hands of slimy, goo creature that was tormenting Troi. And unlike other huge honkin’ character deaths, this one takes place within the first twenty-minutes of the episode! And while Next Generation was a solid hit in season one, it wasn’t quite the phenomenon it later became. I often wonder if Crosby regrets leaving when she did (in a related story of career decisions she may regret–she posed for Playboy in her pre-Trek days. In the days before the Internet, that issue was quite the collector’s item at cons).

I can also assume the new digital upgrade for Next Generation will make it easier for fans to find Crosby’s “farewell Easter Egg” in “Symbiosis.” For those of you who may not know, the episodes were filmed out of order. Crosby filmed the episode her character’s death and then came back the next week for a regular episode that would air before it. Watch closely in the background and you’ll see Yar turn and wave goodbye to the fandom.

6. Patrick Stewart
You can make a case that Patrick Stewart is the best actor to grace the Trek universe. And while season one doesn’t give him many chances to show the range we’ll see in later years, it’s still a lot of fun to watch a Shakespearean actor chew the scenery and deliver techno-babble speeches. The series wisely sees that Stewart and frequent guest star John de Lancie have just the right kind of chemistry on-screen and allows the two to chew some major scenery together during season one–not only in “Farpoint” but also in the underrated “Hide and Q.”

7. The Ferengi.
Remember when the Ferengi were supposed to be Next Generation’s answer to the Klingons? Yeah, it didn’t exactly work out that way in the long run, but early on, we’ve got a lot of build-up to just how “bad-ass” these new villains are supposed to be. The first six or so episodes build up the Ferengi threat, only to see it all come crashing down around the show’s ears (pun completely intended) when they finally make their first appearance in “The Last Outpost.” The series tries to redeem them a bit in “The Battle” but it’s too little, too late. Luckily for the franchise and the Ferengi, Deep Space Nine will come along and redeem them. However, you can still find a lot of unintentional humor at seeing the crew quake in fear of their first encounter with the Ferengi.

Convinced yet?  If you are and want to help out Slice of SciFi, you can order the first season on Star Trek: The Next Generation on Blu-Ray using this link.  A portion of your order will help support Slice of SciFi!

And why not take a moment to tell us your favorite and least favorite moments from season one?  You can tell us in the comments or by calling our listener feedback line at 206-339-TREK.