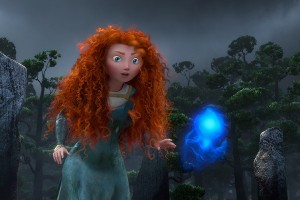 Ever since Up made me tear up in the first five minutes and the final few minutes of Toy Story 3 made me cry, I’ve had fairly lofty expectations when it comes to a Pixar film.  And while I was disappointed a bit with Cars 2, it’s biggest sin is that it’s not quite as great as a lot of the other output Pixar has given us over the years.

As the first non-sequel Pixar has put out in a couple of years, I had some fairly lofty expectations when I sat down to take in Brave.

And while the film doesn’t quite achieve the pinnacle that Up, Wall-E or the Toy Story movies had, it’s still a spectacularly enjoyable film that both kids and adults will really enjoy.

Brave is Pixar’s first attempt at taking on the classic Disney fairy tale formula and giving it a new spin.  Set in Scotland, we meet Princess Merida.  She’s more Katniss Everdeen than Snow White or Aurora, happier to be shooting arrows at targets and riding her horse than learning all the in’s and out’s of being a princess, much to her mother Elinor’s chagrin.   When Elinor and King Fergus decide it’s time to choose her a suitor from a group of three princes, Merida rebels and turns to an old witch for a spell to change her mother.   Unfortunately, Merida isn’t quite specific enough in her request of the spell and she ends up changing her mother in an entirely different way than she imagined.

As with all Pixar films, Brave is a visual delight.  Merida has flowing red hair that seems to have a personality all its own.  Watching the closing credits, I couldn’t help but wonder if there was a team devoted entirely to rendering her hair.    Once again, Pixar wins huge points for pushing computer-generated animation to a new level.

As Pixar’s first take on a traditional fairy tale, the film has some nice moments (the best coming when Fergus imitates Merida to her mother early in the film), but there are times when the story follows a far too conventional and predictable path.   There are still a few surprises along the way, but if you’re looking for a twist to fairy tales, it ends up being more like a nice tweak or two.

Brave is an above-average Pixar film.  But as I’ve said before, the studio has given us such a lofty standard that it means Brave is probably one of the better films you’ll see this year.

I will warn you there are some darker, potential scary moments early and late in the movie, involving bears.   Parents may also want to know that [SPOILER ALERT] the spell turns Merida’s mother into a bear for the movie’s second half[/SPOILER ALERT].  You may also be wondering whether this is worth the up-charge for 3-D.   As with Up and Toy Story 3, Pixar understands how to use 3-D to enhance the movie experience–the film has remarkable depth in 3-D.  It’s probably only really essential for when we see the willo-the-wisps in the forest.