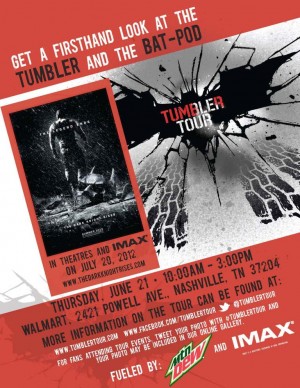 In anticipation of The Dark Knight Rises opening on July 20, a couple  of the vehicles used by Batamn in the mvoie is touring the country.

Fans of the Dark Knight living in Nashville will have an opportunity to see the Tumbler and Bat Pod on Thursday, June 21. The traveling exhibit will stop at the Wal-Mart at 2421 Powell Avenue in Nashville, TN from 10 a.m to 3 p.m.

The first fifty people who come dressed as a Dark Knight character will receive a ticket to an advanced screening of the film.

Curious to know if the tour is coming to your city? You can find out details and see photos of the tour HERE.

"Batman: The Long Halloween": an effective if over-long story
"Batman: Death in the Family" makes alternate timelines fun
Mark Edlitz: Exploring the Lives Behind the Superheroes
"Justice League": An Action Feast, but a Fan's Famine