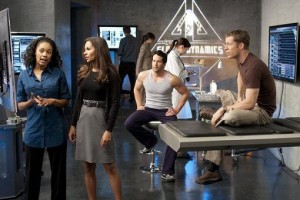 It’s been a while since a Eureka episode has made me laugh out loud for part of the episode, but episode 5 did exactly this.

Zane reboots the Matrix program to see just why it placed Jo and Carter in a romantic relationship in the VR program.  Fargo is insistent that the program be shut down as this program is the one that killed Dr. Holly Marten.

Meanwhile Dr. Warren Hughes is back to assess the entire crew of the Astraeus to see if they are competent to return to their work.  He starts with Fargo and in the middle of a Laser Tag game between Hughes and Fargo, Carter and Fargo switch brains.  As Alison discovers that Fargo is in Carter’s body, Carter is fighting to keep Fargo’s testing in line in order for Fargo to keep his job.

>During a neuro scan, Fargo and Carter switch back.   Grace and Alison figure it’s a glitch until the next morning when Zane and Carter switch bodies; While Carter’s in bed with Alison and Zane’s in the shower with Jo.  “Zane” returns to GD where Henry and Grace try to figure out what is happening while “Carter”  plays bad Sheriff.  When “Carter” finally returns to GD, “Zane” is ordered by Hughes for his assessment.    Fargo sends MARTHA to keep an eye on Zane when he discovers the program hasn’t been shut down and packed up yet.  MARTHA goes crazy and chases after Hughes and “Zane”.

As “Carter” is waiting to find out what is going on with his brain, he and Jo have a heart to heart talk, which leads to Carter and Zane switching back during an awkward moment between the two.

Alison decides to try nano-surgery to find out what is happening in Jack’s brain.  Halfway during the surgery, Jack and Alison switch brains.

Zane shows Fargo what he’d been doing with the Matrix program and show him that there is still one connected brainwave in the program.  And there is a very good chance it could be Holly.  If they could find her body, they could save her.  At the same time Henry, Grace and Alison realized everything that’s been going wrong, including Jack’s brain jumping, has been running on Zeta waves, the same that the Astraeus crew have been subjected to.  And that if the program stays on, it will keep using Jack as “free wi-fi” until it shuts down Jack’s brain entirely.  Fargo makes the decision to have the program shut down, knowing that Holly could still be in there.

As Zane unplugs the program, it shuts down Jack’s brain.  As his neuro systems begin shutting down, Hughes suggests “rebooting” him.  Alison goes back in and with the help of the nanobots, she “reboots’ his brain and he returns.

After watching everyone work together over these problems, Dr. Hughes decided the crew are well enough to return to their duties.  Grace tells Henry that she still need some time away and that she needs to leave for a while.

Later that evening, while at Cafe Diem, Jack gets on one knee and finally proposes to Alison…with a beer battered potato ring.

Like I said, the scenes with the brains swap with Jack/Fargo and Jack/ Zane had me laughing out loud for the first half of the episode.   Colin Ferguson shows his acting range as he manages to pull off both Fargo and Zane’s characters to a tee in both body language and the acting.   And then playing not only Alison, but a jealous Alison was very well done also.

I was expecting Grace to leave Henry at some point, although I hardly think it’s, as last season she pushed him after his time travel and landing in the alternate universe.  And I think Henry has been more than patient with her.

Although on the other side of the spectrum, I was not expecting Jack to propose to Alison.  And I admit, I smiled…widely.  Even knowing that this is Eureka, its the final season and nothing ever goes as planned.