Here’s the first of the last three weeks of reviews. 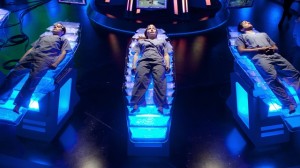 When we last left our heroes the most intelligent minds in Eureka had been kidnapped and were currently being used by Beverly Barlow and her small evil group to create new and innovative designs of weapons while the rest of ; led by Jack Carter and Henry race to find the missing crew members of the Astraeus. One month has passed and Senator Wen and the D.O.D. has decided to call off the search fearing them all dead. When Henry breaks the news to Jack, Alison’s son Kevin decided to take matters into his own hands and find his mother. When important and top secret equipment starts missing from all around Eureka, Carter confronts Kevin who tells him about the machine he’s building to locate the crew and his mother. Jack being his concerns to Henry who informs him that Kevin’s idea is brilliant and it could possibly work. The entire town of Eureka bands together to donate the materials Kevin needs to build the machine.

In the VR world, small things are beginning to happen that are causing questions in the lead crew of the Astraeus and causing concerns in Dekker, Beverly’s co-command in this project. The machine was only build to hold twenty people and with Alison Blake, there are now twenty-one people, therefore several things keep de-rezzing from the system. Alison is the first to see this. Holly is the second when a dragon is introduced to the system and scratches her. Her mind begins to work overtime and comes to the conclusion that they are in a virtual reality existence and that someone has kidnapped them and that they are in fact not four years in the future. She confesses all of this to Jack Carter, who is with her and he kills her. In fact, it is Senator Wen who pulls the neuro-transmitters attached to Holly’s brain, thereby killing her.

Back in the real life, Carter and Andy work together to steal the final component needed for Kevin’s machines to work. As Senator Wen confronts Jack and the others of Eureka who have gathered to witness the search, Kevin’s machine discovers leftover path of the Astraeus and she encourages them to pursue the trail.

Carter, Jo and Henry along with a military backup rush to the place where the Astraeus is housed and find only the ship and the machines. The crew is nowhere to be found.

A couple of the funny parts in this episode was poor Jo’s walkabout which turned out to be anything but. Also, Zane was my favorite character in this episode. The clever use of going back and forth between the real world and the virtual reality world was cleverly done, keeping up the suspense and bouncing just at the right part where it didn’t give too much away but left you cheering for the real Jack Carter only to have the rescue just outside the grasp. 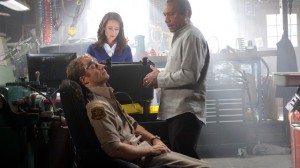 In the very beginning of this episode it is discovered that Senator Wen and Bev Barlow have been working together from the very beginning. From the past season when Bev kidnaps Alison and brain jacked her. Beverly Barlow has been kicked out of the program and ends up in Eureka offering her assistance. Her defense was that she only kidnapped the crew in order to gather their ideas for weapons. They were all to be released after a time. Senator Wen, it seems has taken it one step further and Carter and Jo are told that Holly was the first causality. Someone will have to go into the system as a NPC (non-player character) and blow up the Astraeus, giving a heat signature to the people outside the program to find the kidnapped crew. Carter volunteers to be that person.

Meanwhile in the VR world, Zane is the next to discover the de-rez issue and to figure out that the reality they were told wasn’t, in fact, reality. As Zane figures out what is going on, Carter logs into the game, taking over the “fake” Jack Carter. Jack convinces Zane that he is him confirms that Zane and they others are in a virtual reality system. Together they return back to GD and find the others who have all worked it out at about the same time. Carter tells them that they need to create an ionic resonator in order to blow up the Astraeus so the people on the outside can find them. They need a remote for the explosive device that only Henry has. Grace volunteers to go back to the garage and get it. In the meantime, Carter discovers the differences that Alison has faced in the VR world.

The ionic resonator is ready but without the remote it must be armed inside the ship. Which again, Jack volunteers to do. The resulting explosion leaved no doubt in any of minds that they are, in fact, not in the real world. The resulting explosion causes the entire system to start shutting down, the part of town de-rezzing and disappearing. If the crew is stuck in the same place, they will cease to exist also. They agree to meet back at GD as Jack finds Grace and rescues her from Henry. As help doesn’t seem to be coming, Jack comes with the idea that electronic impulses might push them out into the real world. Zane takes the hit and wakes up in the real world.

In the real world, Dekker and Wen discover Bev had hacked into the system and booted her out, thereby locked Jack into the system. Jo and Henry see the heat signature from the explosion and go to find the crew leaving Henry with Beverly. Senator Wen arrives to stop Henry and Bev. She wants to unhook Jack from the system and Henry makes the choice to trust Beverly over the Senator.

Jo and crew find the ship holding the crew and arrive in time to save Zane from Dekker. Zane shuts down the system and wakes everyone up, pulling them from the system…except Jack. He logs Beverly back into the system and she pulls Jack out within seconds to spare.

In the end, everyone is back home, and it is obvious that there are going to be issues to resolved. Jo was the one to tell Fargo that Holly was dead.

In a twist, Wen wakes in Eureka’s jail with Beverly standing on the other side. When Beverly suddenly disappears, it is discovered that Wen is stuck in the same VR world she help create and she has no way out. 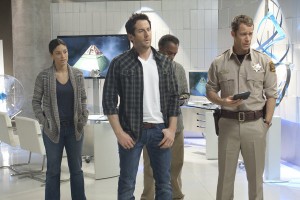 It is very apparent from the beginning that there are a mess of issues that need to be resolved; what Carter discovered in the VR world, Zane’s suddenly dislike for Carter, Grace’s uncomfortableness around Henry, Alison’s sudden uncomfortableness around Jo. The one’s left out of the loop are Henry and Jo who know there are issues but aren’t quite sure what happened in the VR world and nobody will tell them.

This is the amusing return of everyone favorite “nemesis” Doctor Parrish, who’s created a nano- organism he called fireflies. Zane is cataloguing the parts of the machines they were held in at Parrish’s laboratory which seems to be the sudden reason that the fireflies take off and escape.

Carter orders everything in the town shut down anything that might attract the fireflies. Kevin and Jenna are still in the house and haven’t gotten the message and the firefly goes towards SARAH. Carter, Jo, Andy and Alison race to the house to rescue the kids, barely escaping in time.

It is discovered that the crew of the Astraeus, who were in the VR world, were emitting Zeta waves which attracted the fireflies. Jack makes himself bait for the firefly which turns out wrong, and Jo again saves the day by using the plasma net gun, which Zane created in the VR world to capture the dragon.

Jo discovers the secret that had Zane, Carter and Alison had been hiding, but Grace still doesn’t tell Henry her issues and there is still strife between those. Alison asks Jo to stay in Eureka and Jo makes a decision to be with Zane and stay.

Yet once again, poor Andy has lost SARAH again, with this being the second time in so many episodes where SARAH was destroyed. Even the grief for an AI unit was palatable and you feel for the poor Deputy who can’t seem to save the “woman” he loves.

Fargo’s role in this episode was both funny and heartbreaking. Forced to go through bereavement therapy in, of all places, a room called Furries with two male therapists, he opts to take the patch, which speeds up the entire bereavement process, forcing him to go through all five stages of grief in a day or two instead of taking the time needed.

The final scene when Parrish confronts him, ending with both men putting aside their differences and quietly playing a role playing game was one of the best scenes so far this season. Parrish and Fargo, who have been at odds since the introduction of Wheaton’s character and even in this episode, and their “origin story” last season, it was a bittersweet moment to see both men put aside their disagreements to share a private moment for a women they both had feelings for and at one time competed for the affections of.