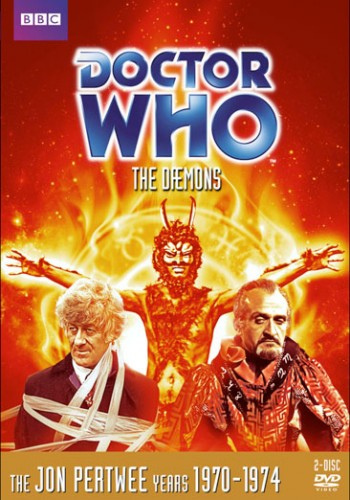 Long heralded as the definitive Jon Pertwee story by both fans and detractors of the third Doctor’s era, perhaps the most interesting thing about the DVD release of “The Daemons” isn’t the story itself or the robust series of extras on the disc, but the fact that it took so long to get to DVD.  Back in the 90’s, it was the color restoration of “The Daemons” that originally brought the Doctor Who Reconstruction team together, beginning a two plus decade run of work to restore the classic series to as pristine a condition as possible for the VHS and then DVD releases.

Now as the DVD line slowly marches to a close, “The Dameons” finally gets its day in the sun again, after years of critical and fan re-assessment.   Produced for the eighth season of Doctor Who, this five-part story, co-written by producer Barry Letts and writer Robert Sloman under the pen name of Guy Leopold, feature all the typical elements of a third Doctor story.  “The Daemons” serves as an meditation on science vs magic and features the series’ fifth story in a row to feature the same guest villain, the Master.

Looking at the lavish production values (well, lavish for the time) and the extensive location shooting done for the serial, it’s easy to see why it’s a favorite of the cast and crew from that era.  Each UNIT regular gets their own chance to shine and, once again, we get a tour-de-force performance by Roger Delgado as the Master.

At five parts, “The Daemons” does suffer a bit from stagnation in the middle episodes, in which a lot of water is treaded as we wait for the climax in episode five.  It’s particularly obvious in scenes with Sgt. Osgood building an energy exchange device under the Doctor’s supervision, with things not quite right until the final episode of the serial rolls around.  But again, as I’ve said before, classic Who isn’t meant to be watched in one large chunk, but instead one or two episode at a time.  Watching the serial in this fashion creates a far more satisfying viewing experience.

And while “The Daemons” is a solid Pertwee story, it’s probably not necessarily the best Pertwee story.  As script editor Terrance Dicks points out in the extras, the ending doesn’t necessarily make a whole lot of sense and there is a bit of padding in the middle episodes. But don’t let one side of the fandom or the other talk you out of seeing the story or set the bar too high on the classic status of the story.

Since this is the story that brought the Restoration Team together, you can expect it’s going to look as good as possible.  If you doubt how much work has been put into the DVDs over the years, just check out the initial color restoration test for episode one included on the second disc or the un-restored clips in the making of documentary.   And while certain episodes aren’t as crisp as others (there’s a huge jump in visual quality in the fourth episode as it was the only one that survived in the original color), the story still looks and sounds great for DVD.

As for the extras, many fans will lament that that team couldn’t secure the rights to the fan-made documentary, “Return to Devil’s End” for this release.  With Nicholas Courtney passing away this year and Jon Pertwee long since passed away, it would have been interesting to hear their reflections on this story either in clips or by including the documentary on the DVD.   That said, the extras are still pretty solid, even if the commentary was recorded several years ago.

Interestingly, the best extra on the set isn’t one related directly to the story but instead is a tribute to long time producer Barry Letts.    The thirty-minute look back at his time pre, during and post-Who is fascinating and I find my respect and admiration for what Letts and Dicks did during the third Doctor era to grow.

So while clearly not the classic certain fans would have you believe it is, “The Daemons” is still a monumental story from the third Doctor’s era.  It’s got most of the things that fans fondly remember from the era and at five episodes, it doesn’t overstay it’s welcome.