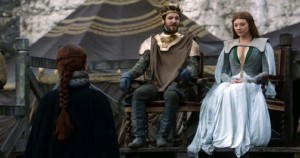 As we saw last week, Tyrion clearly realizes that not everyone at King’s Landing who claims loyalty to the Hand of the King is going to follow through and actually be loyal.   He replaced the head of the Night’s Watch last week and this week he finds out which of his trusted advisers has loose lips.  By creating three separate stories about who he’ll wed the princess to, Tyrion can figure out who’s leaking information to Cersei and how to remove them from the inner circle.  Of course, having read the books, I know where a lot of this game is headed and how Cersei will fight back against Tyrion.   Clearly Tyrion sees her as a threat, but not as big a threat as he should.

Meanwhile, all over the kingdom, things aren’t exactly going well for everyone.   Balon Greyjoy forces Theon to choose between his families–the one that gave birth to him and the one that he’s lived with these past several years.  In many ways, both sides have betrayed him and yet Theon seems content to be a whipping boy, unless he’s whining to his father about how Balon sent him away to be a prisoner to the Starks.   It appears he’s decided to side with his family (for now) with the burning of the warning letter to Robb and his being baptized into his family’s religious sect on the beach.   And it’s interesting to hear how both sides view the Greyjoys as one of those groups that can swing power in Westeros.

All three episodes this year have seen various characters trying to consolidate their hold on power.  Tyrion is doing it, the Greyjoys are trying to return to it and we’ve got a couple other instances this week.   As we saw last week, Margaery is trying to help her new husband Renly hold onto his new found power and influence by making sure he has an heir.  Of course, the problem is that Renly plays for a different team, something that could cause him to lose his grip on power should it come out.  Margeary is shrewd though, offering to bring in her brother to help things along or pretend to be her brother in order to achieve the goal of conceiving a son.  Of course, should this happen, she’ll have some amount of power over her husband for her silence.  In many ways, these developments parallel the situation between Cersei and Jamie Lanister, with each party having something they’d rather kept in the dark about their sexual preferences.

This week also treats us to an epic battle between those bound for the Wall and the Night’s Watch.  It’s a good think Arya is quick on her feet and tell the Watch that the slain boy their commander just killed was Robert’s bastard and not the real culprit.