If you’ve seen the trailer for series seven of Doctor Who, you may have noticed a familiar eye-stalk capping the preview.

After a year off, the Daleks will be back to menace the Doctor’s 50th anniversary.

And producer Steven Moffat promises that fans of the pepperpots are in for a treat.  Not only with Daleks featured in the new series be part of the season, but we’ll also see some Daleks from the classic series run, including some models from the 1960’s.

Moffat says that all of the incarnations of the Daleks will make an appearance next season.

Matt Smith tweeted out a picture yesterday of he and actress Karen Gillan with a Dalek from the original 60’s run. 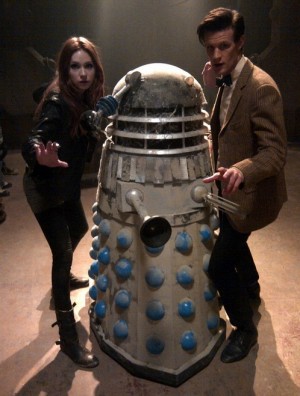