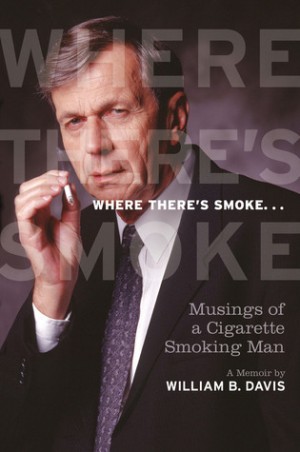 If you’re like me, you probably know the name William B. Davis from his work on The X-Files as the Cigarette Smoking Man.

But if you’ve ever wondered about the life and career of Davis before he found mainstream recognition as one of the best villains in television history,  you will definitely want to pick up Davis’ autobiography, Where There’s Smoke…

Written in a conversational style, Davis engages the reader with stories of his youth and his young acting career in Canada.   Davis chronicles his early work in radio, theater and television in Canada, allowing us to see how he grew as an actor and a person.   Davis even allows us a bit of insight into his own mind, giving these memoirs the feel of a personal conversation with Davis.

Of course, X-Files fans will want to know if there are any insights into the hit series. Davis covers his work on the show, but if you’re looking for a kiss and tell book along the lines of those published by most of the original Star Trek cast, you may be disappointed.   However, there are still a few nuggets that will interest fans of the influential series.  (For example, Davis admits he never quite understood the phenomenal success of the show).

The conversational style of the book makes for a comfortable reading experience.   At times you’ll feel less like you’re reading a book as much as you’re sitting down and having a drink with one of the most familiar genre actors of the last two decades.