Tony Alleyne spent a decade converting the living room of his Leicester, U.K. from an ordinary living space into the bridge of the starship Voyager.

And now, he’s had to dismantle it all. 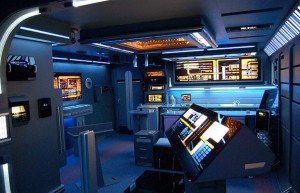 Alleyne and his wife, Georgina are going through a divorce.  And while he lives in the apartment, she owns it and has been paying the mortgage.   His soon-to-be ex-wife decided to sell the apartment, forcing Alleyne to have to dismantle it.

For 10 years Alleyne lovingly transformed his 500-square-foot apartment into a fully realized Trek fan’s dream by hand-crafting all of the furnishings and adding molded walls, a high-tech bathroom, voice-activated blue lighting, air conditioning, a command console and even his very own awesome transporter room.

“To say I’m gutted is an understatement. It is my life’s work—and it looks like it’s going into a skip. I admit there were tears,” he says.