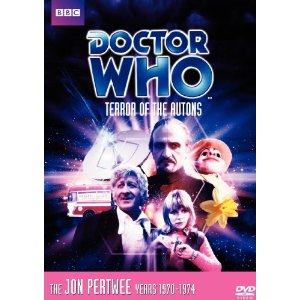 One of the essential Pertwee stories has never looked or sounded better.

>For a story with as many pivotal moments in Doctor Who history as “Terror of the Autons” has, it’d be easy to think the story would collapse under the weight of its own reputation.   Thankfully, that’s not the case and instead of collapsing under the weight of expectations, “Autons” lives up to them and in many cases exceeds them.

As the newly released DVD constantly reminds us in the bonus features, “Terror of the Autons” was the first time that producer Barry Letts was allowed the chance to put his stamp on Doctor Who.   And with “Autons” he and script editor Terrance Dicks did just that, introducing three new regular characters to the Doctor Who universe and putting the series clearly in the cross-hairs of critics who derided the frightening images portrayed on-screen and the impact this could have on the young target audience for the show.

“Autons” introduces us to Mike Yates, Jo Grant and, most importantly, the Master as definitely played by Roger Delgado.  Letts and Dick decided that since the Doctor and the Brigadier had dynamic similar to Holmes and Watson that the series needed a Moriarity for the Doctor.   They created the Master, a renegade Time Lord like the Doctor, who comes to Earth to conquer the planet and destroy the Doctor.

Script-writer Robert Holmes recycles large portions of his “Spearhead from Space” script the year before with “Autons.”  It’s interesting to note that in the UK, this story is hitting DVD along with a re-release of “Spear.”  I can only imagine watching them in rapid succession will only highlight the similarities.  But what sets “Autons” apart is its more focused on the cat and mouse game of the Doctor and the Master, each trying to outwit the other.  Much of the story finds the Autons relegated to the role of henchmen for the Master as he sets one trap after the other for the Doctor.  The story also provides an interesting character study as we see how both the Doctor and Master interact with various other characters over the course of the story.

The story is also one that clearly put Doctor Who on the radar of Mary Whitehouse.  Ask most fans of the classic series to name five infamous moments that drew fire on the show and it’s a good bet that at least two of them will come from this story.   And those incidents all come from a 20 minute or so stretch of the second episode in the serial.

So if this story is such a definitive third Doctor story, why has it taken so long to hit DVD, you may ask.  As with much of the Jon Pertwee era, the original color master tapes were lost.  Black and white film copies were retained and for years shown in the syndication package.   An off-air copy of the show with the full color was held in the BBC archives but it wasn’t until the 90s that the technology came along to merge the black and white film and the color tape back together.  Even then, the VHS release was full of minor and major faults in the film, meaning that in order to release the story onto DVD a lot of work was going to have to be done.

And it has been done.  The video and audio for “Autons” has never been better.   It’s easy to get spoiled by how good the Doctor Who Restoration Team is at their jobs, but the work they’ve done here is truly remarkable.

The extras are solid enough with various parties reflecting on the creation of the Master and the addition of three new cast members.    The commentary was recorded several years ago and features Nicholas Courtney, Katy Manning and Letts.  It’s a fun, informative look at the story though some fans may come away feeling depressed because we realize this will be one of the last times we hear commentary on the Pertwee era from Letts and Courtney.

While the extras are nice, it’s still the story that is the major selling point.  If you’re looking for a story that pretty much sums up everything about the third Doctor era in one four-part serial, you can’t go wrong with “Terror of the Autons.”