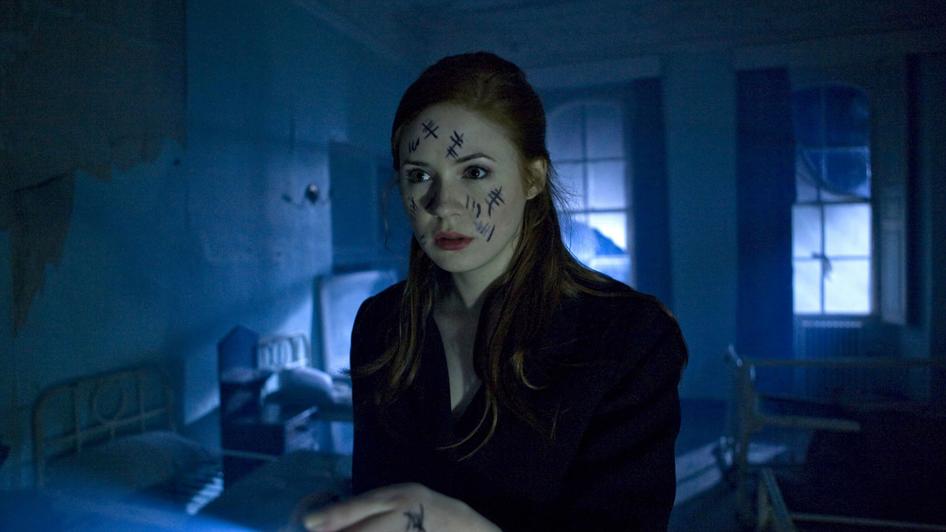 If “The Impossible Astronaut” was all set-up, then “Day of the Moon” should have been mostly pay-off.   And, for the most part, it was.  Except for the fact that watching this two part opener to series six, I couldn’t shake the feeling I used to get during Lost and The X-Files–namely that we were answering one question only to replace it with six or eight more.

At this point,  I still have faith in Steven Moffat to deliver the answers.  But I still have a bad feeling no matter what answer we get to the puzzle that is River Song, it won’t be nearly as satisfying or as interesting as many of us have speculated and dreamed up on our own.  (Or worse yet, it won’t jive with what we’ve dreamed up and we’ll take it out on the show in a backlash).

But, for now, I’m mostly satisfied.

“Day of the Moon” was a less frantic episode than we saw last week.   Last week was all atmosphere and exposition.  This week was trying to be about resolution, but it still seemed to be missing some of the atmosphere that we had last week.

That’s not to say it was terrible.  It just wasn’t quite what I expected.

The Doctor discovers that the Silence aren’t invading Earth, but they’ve been here the entire time.  They’ve been out there, manipulating human history…but for what reason?  We find out they want and need a space suit and send humanity to the moon, but we don’t really see why.   Was it somehow the Doctor manipulating them into doing this so he could expose them?  Or are the Silence trying to expand their empire across time and space?

And has the Doctor made some kind of new, profound enemy that will haunt him across the season?  It certainly seems like we aren’t done with the Silence.

I did like the way in which Moffat pulled in pieces from the past to show the Silence have been with the show all during the Matt Smith era.  We had the blatant foreshadowing from “The Eleventh Hour” referenced, but we also saw how the word Silence has been mentioned.  Add in that last year’s “The Lodger” saw a Silence control console in the upper room and it’s clear that the Doctor has been a thorn in the side of the Silence for some time now–he probably just wasn’t aware of who or what he was battling.

We’re still left with a lot of pieces that don’t quite fit yet.    Again, back to my X-Files comparison, it’s frustrating to have an episode that sets up some potentially long-term, game-changing threads for the series only to have the show try and go back to some jolly adventure next week.  If you watched The X-Files as it unfolded, you may recall that some of the most frustrating episodes were those right after the mythology stories.  But, given how we saw the series has been putting building blocks into place since Smith took over, I’m willing to give the show the benefit of the doubt that even the standalone stories won’t be too standalone in the grand scheme of things.

I also have to wonder if somehow history has been changed for various characters.  I refer specifically to the River’s kiss of the Doctor and her statements following it and the question of whether or not Amy is really pregnant.  It feels like we have two realities unfolding here and that we could create some kind of time paradox.  I have a feeling this is more the case with River and it makes me wonder if the terrible day she refers to in the future is part of her memories and the Doctor’s memories coming together and not meshing.   It they’re passing at different points in their timeline, then at some point there has to be a middle..and I have a feeling that middle or crossroads will be the dark day River has referenced several times.

When it all comes down to it, I was hoping for more definitive answers than we got.  And while I’m sure that Moffat has a plan for this season and beyond, I hope it does’t take too long to get to those answers.

A couple of quick, random points.