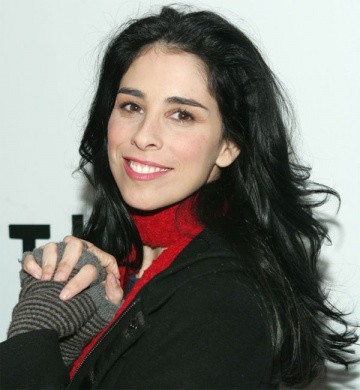 For those of you who may not recall, Silverman guest starred as SETI astronomer Rain Robinson in the third season episode, “Future’s End.”  Rain worked with Tom Paris and Tuvok when the Voyager traveled back in time to 1996.

According to producer Brian Fuller, the production team considered keeping Silverman on the show and making her a regular.  Fuller tweeted the news yesterday.

TrekMovie contacted Fuller about the Tweet and got some more details on the story.

“It was Brannon’s desire to bring Rain on board because he enjoyed writing for Sarah and the freshness she brought to the show,” Fuller tells the site.

Fuller went on to say that Rain could have been a potential love interest for Tom Paris, based on the chemistry that Silverman and Robert Duncan McNeil shared on-screen.  Fuller wasn’t sure how exactly producer and show runner Brannon Braga would have brought Rain onto the show, but you can bet some wacky anomaly would have done it.

But Trek history went another way.  Instead of adding Silverman, the show added Jeri Ryan as Seven of Nine and the rest is, as they say, history.