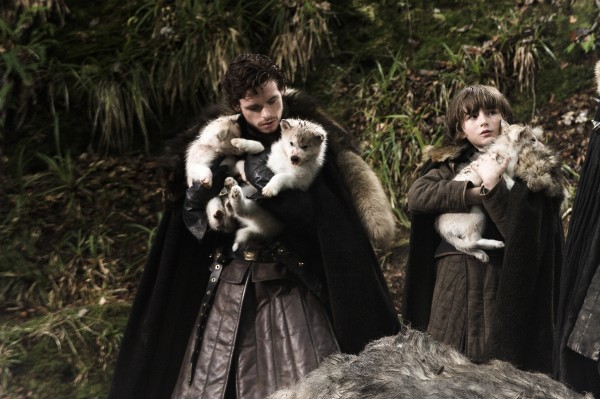 Before the Lord of the Rings hit theaters a few years ago, I attempted to wade through the trilogy again by signing up for an on-line book club with Barnes and Nobel.   In the forum, I recall a discussion about what was being kept for the movies and what wasn’t.  One fan posted they already hated the films and were going to weep during their entire viewing of Fellowship of the Ring because Peter Jackson and company had decided the subplot with Tom Bombadil would be cut.

The conversation just goes to show what a fine line has to be walked when it comes to adapting a beloved novel or series of novels for either television or movies.  Keep too much to please the hard core fans and you alienate (and possibly bore) the casual fans who have dropped by to see what all the fuss is about.  Leave out too much and you run the risk of having your core fan base turn on you or call you a sell out.

Thankfully, it appears that A Game of Thrones has found that happy medium that Lord of the Rings found (weeping Tom Bombadil fans aside) in adapting a much-loved fantasy series for the visual medium.   A lot of that credit has to go to the producers getting George R.R. Martin on board as part of the project.  While Martin has said he wrote the series to unfilmable, it’s his background in television writing and storytelling for that medium combined with his knowledge of how this universe works that gives this adaptation a huge leg-up.

Of course, having a good sized budget and airing on HBO also helps a lot. This allows the books to keep the violence and the more adult themes in tact and not having to water them down too much for broadcast or basic cable audience.  As the first hour of A Game of Thrones showed, this world isn’t a magical fantasy one where everything is good.  It’s a dark, harsh and often cruel world in which a lot of good and bad things happen….and whether it’s good or bad really depends on which character you are.

I’ve read the first installment in the epic fantasy series by Martin, so I had some idea coming in of who was who and where various alliances and loyalties lay in the universe of Westeros.   And while it took a few moments to reconcile my own image of the characters with the actors cast, it didn’t take long for me to pick up on who is who and how they all relate.   I’m not sure if the series was quite as accessible to those making their first visit to Westeros, but I think this episode did enough to establish the big players in the saga and we’ll see the other players fleshed out a bit more in future installments.

Of course, it’s easy to single out the work done by actors Sean Bean and Peter Dinklage in this first installment.    Part of this is name recognition and part of this is that both actors are perfectly cast as Ned Stark and Tyrion Lannister respectively.  The other big name that jumped out is Lena Headey, familiar from her work on Terminator: The Sarah Connor Chronicles.  She doesn’t make quite the impression here she will in future episodes, though the end of the episode does pivot around here (I have to give myself props for predicting where episode one would end.)

But beyond the three most recognizable names, there were a lot of other great performances.  Emilia Clarke as Daenerys Tagarayan rose to the top.  Watching as Daenerys is used as a pawn by her brother to help launch his bid to retake the throne of Westeros was compelling, as was Clarke’s fear of her wedding night with her new husband.   When you start off with hearing that a wedding isn’t a wedding unless there’s at least three people disemboweled and then turn to the stark statement that about what her brother would allow to happen to her to insure his return to power, the series works to establish how different this world is from ours..and how brutal it can be.

But where the show’s success really rests most is the casting of the children.  For every Haley Joel Osment, there are a dozen other child actors who just don’t quite ring true.   And with the children carrying a lot of the various plotlines in Thrones, their casting was essential to get right.  Thankfully, it appears they’ve done just that.  The Stark children are all well cast with Bran being memorable early, if only because of his part in the final moments of the episode.

There are a lot of opportunities here for the show to swing and miss.  Thankfully for this first episode, it’s a swing and a home run.    It’s obvious that A Game of Thrones is going to require a bit more of viewers in terms of actively watching the series and recalling details.  But that’s what good television can and often does demand of its viewers.   I can see this one becoming easily as well thought of by fans of HBO shows The Sopranos, which also demanded fans keep up with plot threads and actively watch the series.

For the next weeks, we’ll get new Doctor Who on Saturdays and new A Game of Thrones on Sundays.  Talk about a perfect way to spend your weekend….

Now, we open it up to your thoughts and conversation.  But before we do that, a few rules on this one.  Please keep all commentary and discussion to events that happen in THIS EPISODE ONLY!   While I recognize the novels exist and many have read them, I also recognize that some have not and are viewing the show only.

Please don’t bring up future plot threads from the books.  We’ll be watching the comments threads and any SPOILERS for future developments in the novel A Game of Thrones or later volumes of the series will be deleted.  Let’s all play nice…