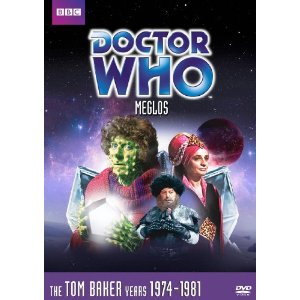 Some interesting ideas buried in as story with a talking cactus

Fan opinion on Tom Baker’s final season as the Doctor has always been a bit divided. There are those who don’t care for it and the radical tonal shift from the previous season. And then there are others (like me) who like the tonal shift and the fact that producer John Nathan-Turner reigned in the excesses of Baker’s performances from the past two seasons, resulting in some of the best work Baker did on the series.

This month’s release of “Meglos” completes the release of season 18 on DVD. The story itself is one of the more derided among long-time Who fans, though I can’t really see why. There are certainly worse stories out there and even at its silliest, “Meglos” is still at the very least entertaining as all get out. A lot of this has to do with Baker, who is given a dual role in the story as the Doctor and the shape-changing Meglos and relishes the opportunity to create two versions of the same character.

A lot of the derision probably comes from the fact that Meglos, before he takes possession of a human body and begins to shape shift, is nothing more than a talking cactus. Yes, you read that right–a talking cactus. It’s pretty much exactly as you’re imagining it if you haven’t seen the story.

Meglos desires a power source used on the planet Tigella. When the Doctor is called upon to mediate a dispute between the religious leaders and the scientific leaders of Tigella over the power device, Meglos traps the TARDIS in a time loop and assumes the Doctor’s identity to steal it. He succeeds, just as the Doctor breaks out of the time loop and arrives on Tigella. Confusion ensues and there’s a lot of the standard chasing around corridors, though in this case it’s the jungle world of Tigella.

The story has some interesting ideas behind it, though they aren’t necessarily as well developed as they should be. The debate of science vs. religion has potential, but parties on both sides are given the most cliched arguments for and against their positions that it loses any real significance.

Beyond the talking cactus, the other feature that most fans remember this story for is the stunt casting of Jaqueline Hill in a guest role. Hill played Barbara Wright during the William Hartnell era and producer John Nathan-Turner never met a guest star he couldn’t use to somehow promote the show. Hill doesn’t play Barbara, but instead plays Lexa, the leader of the religious group. Her work here isn’t quite as solid as when she played Barbara back in the 60’s, but it’s still better than a lot of other guest stars who were terribly miscast by Nathan-Turner in the 80s.

Beyond the story, the DVD offers a wealth of extras that may be the selling point for this particular disc. The commentary is fairly interesting, though at times Lalla Ward’s sarcastic remarks about co-star Baker grate a bit. (The couple had an on-again, off-again relationship during the show and were married after they left Who. So far, Baker hasn’t appeared on a commentary on any story with Ward, though she’s done several. Each time she gets less and less complimentary of Baker).

The extras include a look at how certain visual effects were created and then on the writing of the story. While they won’t improve the story much in many fans’ estimation, they will at least make you appreciate what a labor of love it was to create the story.

“Meglos” has never been one of my favorite Who stories, but it’s no where near as bad as some fans will tell you. It’s a solid middle of the road story and if you can look past the talking cactus, there are a few gems hidden in there.