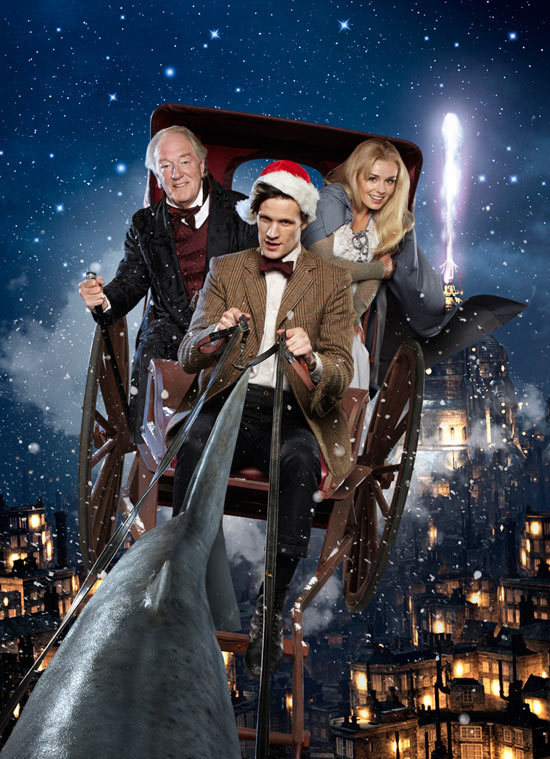 A perfect cup of Christmas cheer.

When it comes to Doctor Who Christmas episodes, it’s always good to remind yourself that it’s better to sit back, relax and just enjoy them. With the exception of “The Christmas Invasion” and “The End of Time, Part One,” the annual Christmas treats aren’t intended to push the on-going storylines forward in any way or start any new ones. Instead, they’re intended to be a fun, holiday diversion to enjoy after a day filled with family, good food and sharing in the spirit of the season.

On that count this year’s entry, “A Christmas Carol” succeeded in just about every way.

Written by show runner Steven Moffat, this year’s special finds Amy and Rory trapped on board a space ship, crashing in the cloud cover of a future world. Sending a distress call to the Doctor, he arrives and sets about trying to convince a Scrooge-like character to allow the ship to land safely, using a machine that will control the clouds. The big issue facing the Doctor is the controls are isomorphically bonded to the miser in question, one Kazran Sardick.

At this point, the Doctor heads back in time to try and change Kazran in the present by changing his past. At this point, Moffat’s script really takes off with the Doctor trying to change the past and help his friends in the present. In many ways, the mechanizations in time and the implications of time travel play out like a compressed version of the arc from the just-released on DVD series five. The Doctor’s journeys through time and space are wonderfully realized and it all leads to a nice revelation about the ghost of Christmas future in the episode’s waning moments. (For this reviewer, it was a moment that once you see it, you realize you should have seen coming, but are glad that the show can still surprise and delight you.)

While Karen Gillan and the newly added to the opening credits Arthur Darvill are given little more than cameo roles in the story and Matt Smith is in full form as the Doctor, the real acting credit goes to Michael Gambon. As Kazran, Gambon runs the gamut in the Scrooge role, filling a role that could be one note with sympathy and nuances. Scenes in which Gambon is talking to the Doctor in the past via a recording are a marvel to behold and the depth that Gambon brings to the role and the heartbreak at realizing why Kazran turned out as he did is superbly done. As a series Doctor Who has often cast big names in prominent roles with varying degrees of success. This is one of the cases where the casting is a home run.

Singer Katherine Jenkins also plays a critical role, though the script wisely concentrates on her strengths and doesn’t require too much of her.

It’s interesting that BBC America would lead up to this year’s Christmas special with a day-long marathon of past Christmas entries from the show. While the Russell T. Davies specials each had their moments, they always ended up feeling cluttered, rushed and less than the sum of their parts. Moffat’s first Christmas special has just the right balance and hits all the right notes. It has some fun moments and the script pauses to allow the implications of things to sink in. Which type of special you prefer will come down to a personal taste, but for now I find myself much fonder and more favorably inclined toward this year’s special than I have been to most of the previous counts. (It certainly is miles better than the overblown, “The Next Doctor” which completely spiraled out of control in its final act).

Strong acting, a solid script and just the right tips of the hat to Dickens. Add it all up and you’ve got the best Christmas special Doctor Who has seen so far.

And if you saw that trailer, you know I’m eager for series six to start immediately.