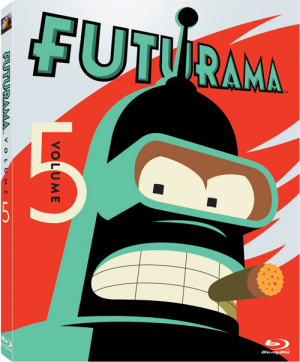 Buy the DVD or BluRay

A welcome return of one of the best animated series of all-time. A must-have for fans.

While many will debate whether or not The Simpsons is running out of steam creatively, most animation fans would agree that Futurama got cut down its prime on Fox. Canceled after five seasons of being pulled all various time slots and often pre-empted by other programming, Futurama went on to find a solid audience thanks to repeats on Cartoon Network’s Adult Swim.

That lead to first a set of DVD movies and now to the series coming back from the grave earlier this year on Comedy Central. Fans of the show rejoiced.

Now fans can get rid of their DVRed copies of the first 13 new episodes of the show we’ve seen in years and upgrade to DVD or Blu-Ray with the fifth collection of episodes. Collected on two discs, the thirteen episodes from the recent run on Comedy Central start off slow, but quickly pick up the stride the series had when Fox unceremoniously pulled the plus all those years ago.

Among the highlights of the set and the new batch are “The Late Phillip J. Fry” with the Professor invented a one-way only time machine and “The Prisoner of Benda” with body-switching by our favorite characters. Both stories are on-par with the best the series offered during its initial run and will have fans laughing out loud as well as being touched by the emotional resonance the series achieves.

And even if the first two back, “Rebirth” and “In-A-Gadda-Da-Leela” aren’t exactly classics, each episode on the set has some solid laughs and is entertaining enough to enjoy for the 21 minute or so running time.

But as with all Futurama sets, it’s not just the episodes, it’s the extras that are a selling point. Each episode has a commentary with a wide variety of participants from series producers Matthew Groening and David X. Cohen to the creative talent of John DiMaggio and Billy West. The conversations are lively and informative, helping to point out things you might have missed the first time as well as pulling back the curtain on the creative process. But the extras don’t end there. We also get the full length version of Fry’s comic book from a pivotal episode as well as a table read of “Benda.” Also included for the completist are the intros from when the DVD movies were broken up into episodes for airing on Comedy Central.

All in all, it’s the usual strong offering we’ve come to expect from Futurama sets.

The only big drawback is similar to the movies–the packaging. The first four sets were released in study plastic cases. The movies and this set are in cardboard cases where the discs slide in and out. It’s not as solid and it could lead to disc scratching upon repeated removal from the packaging.

But packaging aside, this is a great set and must have for any Futurama fan.