Unless you’re a Grinch, you’ll have a good time with these holiday treats 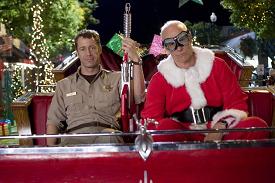 Holiday episodes for popular television series are nothing new.  They’ve been around since the days of old radio and they’ll be around in whatever the next step in popular entertainment is.

Fans of the shows will be delighted by the episodes, provided you don’t come in expecting major movement in the on-going arcs for each show.  In fact, it might be best for Warehouse 13 fans to remind themselves that “Secret Santa” is offered as a bit of a “lost” episode and takes place before the events of last season’s cliffhanger finale.

If you’re not a Grinch and seek to pick apart every last detail (or in the case of Eureka, spend too long worrying about details of the alternate timeline and how does this all fit into the on-going story there), you’ll probably have a lot of fun with them.

Of the two episodes provided, the Warehouse 13 episode comes out just a bit stronger.  Called “Secret Santa” the story finds Pete and Myka looking into the affairs of a man apparently being attacked by the spirit of St. Nicholas.  As always, there’s a twist or two along the way and while none of them are completely surprising, the story is still a lot of fun.  Actor Paul Blackthorne, best known for his work as Harry Dresden in television version of The Dresden Files, does solid work as the man being tormented by the spirit.    Also joining the guest cast is television favorite Judd Hirsh as Artie’s father.  It’s nice to see solid guest acting work compliment the usually solid work of this cast.   (And there’s a great homage moment by Pete, closing up his Tesla.  You’ll know it when you see it.  Also if you tend to tune out during the opening credits, don’t. The series has some fun tweaking them with the holiday spirit)

That’s not to say Eureka‘s episode is a lump of coal.  It’s the standard Eureka formula of an experiment has gone horribly wrong and now the usual gang has to try and figure out how to reverse things.   The real treat is some of the other running threads, including Carter’s gift of holographic caroler who pop up and start singing every time he says the word “Christmas” and the mystery of who the great Secret Santa is.  There’s also the welcome return of Matt Frewer as Taggert, looking into the science of  Santa.  Frewer is a delight and a perfect addition to the holiday cheer and warmth.

Both episodes are solid, enjoyable holiday fun.  Unless your heart is simply two sizes too small, you’ll like what’s offered here.