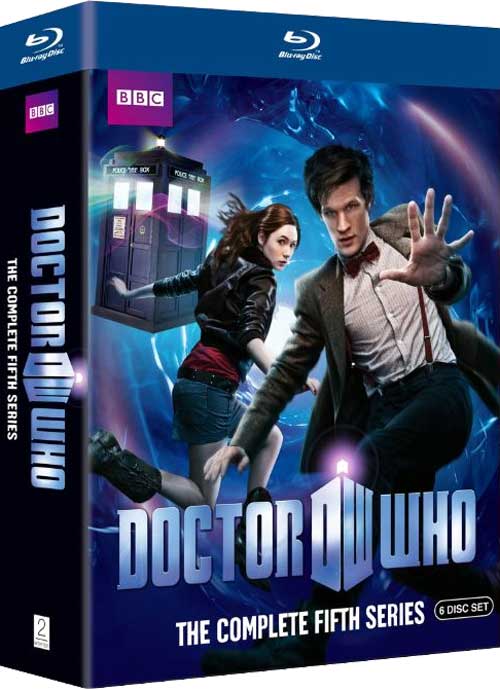 Buy the DVD or Blu-Ray

For decades, Doctor Who has been built on change and reinventing itself. From the second season on, the series has changed lead actors, supporting actors and production teams.

Heading into the fifth series of the relaunched Doctor Who, the stakes were as high, if not higher than when the show triumphantly returned in 2005. A new Doctor, a new companion and whole sale changes in the production team. In fact, the only thing that really remained from the era run by Russell T. Davies was the musical contributions by composer Murray Gold.

After years of wondering what a series run by Steven Moffat, writer of some of the most loved and respected episodes of the new series run, would look like, fans finally got their chance to experience it. I’ll admit that headed into the new series, I was cautiously optimistic about things, but I still had my reservations.

Those reservations vanished within the first half of season five’s first episode, “The Eleventh Hour.” And as the rest of the 13-episodes unfold, Moffat and his Doctor, Matt Smith and his new companion Amy Pond all make an indelible mark on the series and its long, rich history. Moffat isn’t reinventing the wheel here. Instead, he’s offering a new look at an old sensibility.

Downplaying the Doctor as the superhero of the universe aspect that drove me crazy in the last two Tennant seasons, Moffat instead straddles the line between old-school and new-school sensibility. Most of the episodes featured in series five feel like they could easily reside among some of the greats from the classic series run, but they also have the arc storytelling that Davies worked to hard to introduce to the modern show (with limited success).

Moffat’s arc is a far more fascinating one than much of what Davies introduced during his four-year tenure as Doctor. Part of it is that the arc is allowed to develop and give the audience answers over the course of the season. Another is that Moffat allows time to examine the implications of certain developments on the characters (specifically that of Amy Pond) instead of just throwing out a development or two and moving on to the next one.

Watching the 13-episode run again, the episodes all feel more consistent that the Davies run. In many ways, there’s the energy the series had in its first two seasons back. Doctor Who has a sense of wonder and excitement again, almost as if all those involved can’t believe how fortunate they are to be pulling off one of the greatest seasons in the history of the show.

Moffat’s arc that actually embraces and uses time travel is fascinating and compelling. It’s one that is just clever enough that it will make sense to those viewing it for the first time but also reward those who go back and rewatch the stories, looking for clues. In fact, watching it again knowing where it all goes will only give you a greater respect for what Moffat has done here.

That’s not to say the season was perfect. But there has yet to be a perfect season of the show. This one just comes closer than a lot of others.

Hitting DVD and Blu-Ray, this series box set is a bit of a step back from those we got during the Russell T. Davies era in terms of extras. The Davies set had commentaries for every episode but this one only has six. And the commentaries are mostly limited to early season stories. I was hoping to hear more about how the entire story came together, but that may be for another time. Also conspicuous in his absence from the commentaries is actor Matt Smith. It may be due to scheduling, but I’d love to hear his thoughts on taking over the role.

The commentaries presented aren’t just audio, though. Instead they’re “In Vision,” meaning you can see the various participants doing the commentary. It’s not quite as exciting as it sounds because it boils down to little more than watching them comment on what’s happening on screen. Watching them, I found myself wishing we’d used the room on the disc and budget for more commentaries on other episodes.

The other extras are interesting as well. We hear from Matt Smith via video diaries. We also have featurettes on some of the monster in the season. We also get cut down version of the Doctor Who Confidential episodes.

As I’ve said before on other Who releases, I’m glad to have the episodes in a nice box set. However, the commentaries and extras often feel a bit too congratulatory and too close to when the episodes first aired to be as effective or honest as those on the classic series releases. I imagine a re-examination of the episodes in ten years might be interesting, but most fans aren’t going to want to wait a decade for the extras.

But the selling point is the season itself. The best season of the new series is well worth the investment. If you’ve got a Doctor Who fan on your Christmas list, this is the item you’ll want to get them.