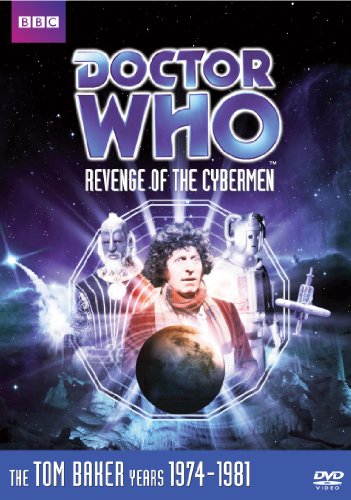 A mixed-bag of classic stories this month. But as always, the extras sell the discs

Released together as a Cybermen themed box-set in the UK, “Revenge of the Cybermen” and “Silver Nemesis” are the last two classic series stories to feature the popular baddies to hit DVD. That’s probably because neither is highly regarded in the fan community and both are viewed as the story that sticks out like a sore thumb in what is otherwise a pretty good season for their respective Doctors.

Of the two, “Revenge of the Cybermen” is probably the stronger story, but neither is a shining example of classic Doctor Who at its best.

“Revenge” comes to us from Tom Baker’s first season as the Doctor. Following the events of “Genesis of the Daleks,” the Doctor, Sarah and Harry are sent back to Nerva Beacon, but at a time before they left. There they discover the crew is fighting a mysterious plague while in orbit around what’s left of the planet Voga. Voga it turns out is rich in the precious metal gold. Turns out gold is pretty crucial to stopping the Cybermen since it was discovered that the metal can clog up their respiration systems. Before long, we discover a traitor on board who alerts the Cybermen to the position of Voga and one of the last remnants of their fleet shows up to destroy the legendary planet.

“Revenge” pretty much follows the standard template for Cybermen stories established during the Hartnell and Troughton years. The Doctor and company arrive, are suspected of being behind whatever strange series of events are occurring only for it to be revealed halfway through the Cybermen are doing it. The Cybermen are easily defeated by whatever element or plot thread is abundant in the story–in this case gold. Interestingly, it’s the weakness to gold that will be seized upon and carried over into the 80’s stories featuring the Cybermen. This could be because for years “Revenge” was the only complete Cyber-story in the BBC archives.

The story has a less than stellar reputation among most Who fans for a variety of reasons. One is the rather emotional Cybermen and another is the feeling that we’re watching little more than a recycled story from an early era of the show. Looking at it again all these years later, “Revenge” holds up a bit better than many fans would have you believe. It’s not a great story, but it’s not as terrible as some fans say.

If only, the same could be said of “Silver Nemesis.” Produced to celebrate the series’ silver anniversary, this three-part story is a mess from start to finish. The plot involves neo-Nazis, the Cybermen and a woman from the past who knows a lot about the Doctor’s history all competing for a mysterious asteroid that will give them power. The three-part story suffers a lot from a complete lack of focus and trying to cram far too many participants into the story than three episodes will feasibly allow. The Cybermen don’t fare well in the story, probably only being included in the story because they’re silver and it was the show’s silver anniversary. And it doesn’t help that the monsters are reduced to a blubbering mess if gold gets within a fifty mile radius of them during the story. (The show is never big on continuity, but even this stands out like a huge sore thumb)

It also doesn’t help that “Nemesis” is essentially the same story done better two stories before in “Remembrance of the Daleks.” It’s easy to see why a vast majority of the British public may have tuned in for the 25th anniversary story and had their assumptions about the direction the show was taking in its later years confirmed. “Nemesis” just isn’t very good and time hasn’t been kind to it.

One big sticking point is that the story was extended for VHS release, incorporating in new footage that minimized some of the more self-congratulatory points of the story (the Doctor and Ace seeing the Queen from afar is wince-inducing as is a moment of blatant social commentary that the story works far too hard to shove into the proceedings) and gave the fans some cool moments like seeing the newly redesigned TARDIS key and the portrait of Ace that hinted of things to come. Some of the scenes are included in the deleted scenes section, but given that we’ve had less than stellar special editions produced for “Planet of Fire,” why the BBC and 2|Entertain didn’t spring for an extended cut of “Nemesis” makes little sense. It also means that most fans will keep their VHS copies of the story (at least this one will).

The good news is that both stories look and sound great on DVD. It’s the usual greatness we’ve come to expect from the Doctor Who range. Both stories feature commentaries with a wide variety of those involved contributing. The one for “Nemesis” is interesting if only to hear script editor Andrew Cartmel admit that writer Kevin Clarke may not exactly have “got” what made a Doctor Who story. The “Revenge” one features a wide range of participants and, for once actress Elizabeth Sladen seems to be in a good mood for commenting. She’s thoughtful and insightful on the strengths and weaknesses of “Revenge.”

Of course, there are also a wide range of other extras and features on the making of each story. Missing is the U.S. produced special on the making of “Nemesis” because the rights couldn’t be secured to it. But the new making of is a bit less congratulatory and a bit more forthright on what went right and (mostly) wrong with the story.

The most intriguing extras comes on the “Revenge” release. The story is infamous among Who fans for being the one that kicked off the VHS range years ago. Somehow, the story won a poll at a convention among fans and saw the light of day as an expensive, priced for rental VHS release. At the time, repeats of the classic serials were rare and Who fans were excited by the release of “Revenge.”

The story of that as well as the blackmarket that existed for fans to trade VHS copies of older stories is told on the disc. And it’s fascinating and eye-opening. Today’s fans may complain that their favorite story isn’t out on DVD yet, but looking back you’ll realize they have little to really complain about. Modern Who fans need to check out the extra “Cheques, Lies and Videotape” to find out how good they have it compare to older Who fans.

If you can only pick up one release this month, I’d say go for “Revenge.” It’s not great, but it’s certainly the better of the two Cyber-stories we’re getting.