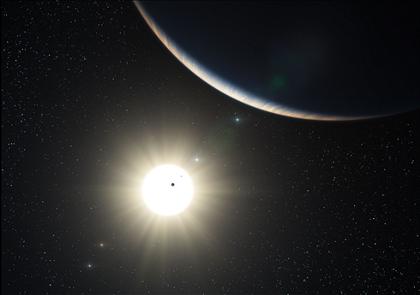 Astronomers have discovered at least five new planets in orbit around a sun-like star more than 100 light years away, the European Southern Observatory reports.  And the good news is there could be at least two more planets in the system, including the smallest planet discovered outside our solar system.

The six-year study examined star measurements for hints as to what planets might be nearby. Scientists also “found evidence that the distances of the planets from their star follow a regular pattern, as also seen in our Solar System,” the ESO said in a statement.

“The really nice thing about finding systems like this is that it shows that there are many more out there,” said Alan Boss, of the Washington-based Carnegie Institution for Science, who wasn’t involved with the find. “Mother Nature really had fun making planets.”

Although most of the planets identified are large — about 13 to 25 times the mass of (earth) — those behind the discovery, announced Tuesday at an international conference in France, say they’re nearly certain they’ve identified one only 1.4 times the size of Earth.

Scientists have been spotting planets beyond our solar system for the past 15-odd years, and they’ve now catalogued some 450. But most finds have been limited to one or two or three planets, usually gargantuan balls of gas similar to Jupiter or Saturn.

But at up to seven planets, the new discovery is almost as rich as our own solar system, which counts eight.

Christophe Lovis of Geneva University, one of the scientists behind the find, said the first five were most comparable to Neptune. “They are made essentially of rocks and ice. They have a solid core. But on top of that is a layer of gas, of hydrogen and helium most likely,” he said. “They are probably not habitable.”

The sixth is a possibly a Saturn-like planet, while the seventh, the smallest, would be so close to its star that its “year” would take just over a day.

Lovis and his team haven’t been able to observe the planets directly, which is typical. Few planets can be seen against the blazing light given off by their much more massive parent stars. The European Southern Observatory compares the challenge to “spotting a dim candle in front of a raging forest fire.”

So the scientists used the observatory’s 11.8 foot telescope at La Silla, Chile, to study the planets’ parent star, known as HD 10180. Over six years, they took 190 measurements, checking the star for the telltale wobbling caused by the gravitational forces of nearby planets.

Boss noted that the method was “biased toward finding the big guys” because the greater the planet, the greater its gravity and the more it made its parent star wobble. But he said the discovery showed that finding smaller planets was still possible.

“This field has gone from zero to close to 500 planets in just 15 years,” he said. “Fifteen years we did not know about the big guys. Earth-like planets are going to be quite commonplace.”