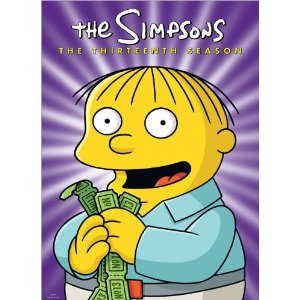 Fans of any long running series will agree that their favorite show has its highs and lows. What it may be harder to find agreement on is where the highs are and where the lows are.

Like another favorite series of mine, “Doctor Who,” “The Simpsons” is a product of the creative team behind the show. And, of course, whether you like a particular creative team’s run on the show is a matter of personal preference.

Case-in-point–the teen years of the popular animated series. Some fans love them, others are like Comic Book Store Guy and quick to declare every episode the “worst episode ever.” And while season thirteen of the long-running animated series may not deliver as consistently as the glory days of seasons three through five, there are still enough gems in the thirteenth season to make it worth your time.

The episodes that represent the thirteenth season of the show all have their highs and lows. Among the highs is the return of Artie Ziff and the show’s riff on “Indecent Proposal.” Among the lows is that year’s Halloween special, which seems, at times, to be trying too hard to emulate the creative successes of earlier installments.

For the most part, the episodes are solid fun with at least a laugh or two per story. Yes, you can see how the show is starting to repeat some of its themes, plots and jokes time and again, but for the most part there’s still enough of a tweak or new stuff here to be of interest.

The better news for fans of “The Simpsons” on DVD is that this release is a return of the extras-packed box-sets and not a quick cash grab like last year’s disappointing season twenty release. (It was put out by 20th Century Fox to capitalize on Blu-Ray and featured no extras). Every episode features a commentary track by rotating members of the production team. The tracks are always entertaining and chock full of details about the show, its production and its development. The good news is that the episodes have had long enough to settle for the creative team so that we can an honest assessment of the stories.

One interesting update (or maybe it’s been so long since we got an extras-laden  set that I forgot) is that the commentary tracks default to on-screen subtitles when viewed. It’s a nice addition and allows you to keep up with what’s unfolding on screen or to understand better what the creative team may be reacting to in the dialogue.

The four disc set also includes a wealth of other great extras that make the discs worth the investment. If you’re a fan of the show and you have the other twelve sets, you’ll want to make room on the shelf for this one. Even if you don’t like the season, hearing about the hows and whys of its creation may give you a different appreciation for it.

About the only complaint is, once again, the packaging. Since the sets have gone to the character-themed packaging, the internal packaging has taken a dive. The DVDs are including in a sturdy cardboard slip case and you have to slide the discs in and out. It may be less bulky than the traditional packaging, but it still creates a larger opportunity to scratch the discs as you take them out for viewing.