If you felt a disturbance in the Force, that’s because at the Star Wars Celebration held last weekend in Orange County, Florida, George Lucas and Mark Hamill introduced a brief sequence that was deleted from the opening moments of Return of the Jedi. 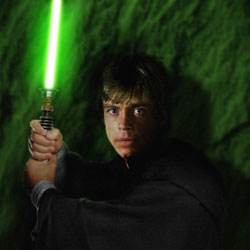 If you weren’t there or didn’t watch it on YouTube before it was removed for copyright violations, let me describe it to you.

Prepare to have your mind blown. (And as we know from The Big Bang Theory’s Sheldon, once a mind is blown “it can not be re-blown.”) You’ve been warned. Here’s what you missed:

Vader walks with purpose down the corridors of the newly rebuilt Death Star. The Sith Lord enters his private mediation chamber.

The camera slowly creeps in as, in solitude, Vader uses the Force to communicate telepathically with Luke Skywaker:

“Luke. Luke. Join me on the Dark Side of the Force. My son, it is the only way.“

Lucas then cuts to Luke who is in a dark cave wearing a cloak that mostly obscures his identity. Vader continues to summon him.

The camera drifts down as we see Luke building a light saber.

A wide shot reveals that C3PO is waiting for Luke just outside the cave. In a few moments, the two will trek to Jabba’s Palace in an effort to save their friends who have been captured by the vile (and gold-bikini-loving) Jabba the Hutt.

The scene was shared with those in attendance as a way to wet their appetite for the complete saga’s debut on Blu-ray in 2011. More significantly, however, the scene implies a version of Return of the Jedi that was never made.

Despite its power, the chilling sequence was wisely cut. It suggests story lines and themes that aren’t explored in the rest of the movie. The scene sets up the notion that later in the film that Luke will be tempted to forsake his ideals and give into the dark side. But except for these few moments where an angry Luke contemplates slaying his wounded father, Luke never really strays down that path or loses himself.

At the convention Mark Hamill told the crowd that after he read the scene in script form he thought: “I’m going to be the antagonist in [Return of the Jedi] and the conflict will be if I completely turn to the dark-side.” Little did Hamill know that he unwittingly and accurately predicted the plot of the second trilogy.

Imagine if the entire film reflected the spirit of those deleted 50-seconds. Imagine the story lines that could have been explored. Luke could have fallen prey to the seductive powers of the dark side. Han Solo (as Harrison Ford wanted) could have sacrificed his life to save his friends. Leia might have lived up to the prophecy that Yoda spoke of to be the other Skywalker who could bring balance to the Force.

The deleted scene is a tantalizing glimpse into a darker and, possibly, more complex version of Return of the Jedi, the concluding chapter in the epic saga.