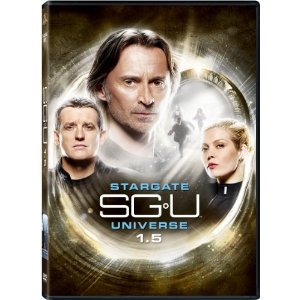 The latest installment in the long-running “Stargate” franchise proved divisive among fans right out of the gate. From its first episode, the series affirmed that this wasn’t your typical “Stargate” series, boldly going in a new, darker, more character driven direction for the franchise. And while some fans were hesitant to embrace the new direction for the franchise, those who did were treated to a compelling ride, especially as the series hit its stride and never looked back.

The ten episodes collected together for “Stargate: Universe Season 1.5” show the series hitting its stride and never looking back.

The show quickly resolved the mid-season cliffhanger but offered no easy answers for the crew of the Destiny. In the show, actions had consequences not just in a single episode, but in the long term storyline and development of the series. Colonel Young’s decision to leave Rush for dead on a deserted world came back to haunt him and the crew not only with a new external threat, but with a shifting of alliances on board the Destiny. The story arc of various characters choosing sides in a potential mutiny on board the ship was the season’s best storyline and is one that, thankfully, hasn’t been neatly pushed aside as we get ready for season two.

About the only misstep the series made in the second half of season one was the far too easy resolution to stranding an away team on a distant planet as Destiny slowly moves out of range of the Gate. The misstep is that the situation is far too casually resolved and it ends up feeling like a bit of a cheat, though a necessary one for the events that come in the season finale.

Watching the second half of season one again on DVD is a treat. Most episodes end on a major or minor hook for the next installment, meaning its easy to power through an entire disc or two of episodes without realizing it. The only downside is that you quickly run out of installments and are left wanting more.

If you’ve already seen the episodes, there are some solid extras on here to tempt you. Each disc has a variety of short features on the show, its actors and the production. They’re not terribly deep, but they do offer some interesting insights into the creative team behind the show. The big extra is commentaries by the cast and crew for every episode. In a day and age when only selected episodes on a season set will get a commentary, it’s a treat to hear reflections by various participants on each installment. The only drawback is that the set has come so close on the heels of the series wrapping its first season that those involved haven’t had as much time to let things settle a bit and to really reflect on the strengths and weaknesses of each story.

And, of course, there’s still the complaint of many fans at the perceived double-dipping on DVD and Blu-Ray sets. The half season does contain a price tag comparable to buying a full season of “SG1” on DVD and those of you who are patient will know a full season box set is coming in the near future. MGM at least tries to address this grievance for fans by including a fold out, full season slip case to fit both halves of the season into (if you purchased season 1.0).

Still, the biggest selling point of the set is the episodes themselves. In my initial review of “SGU,” I compared the work being done here to watch “DS9” did for the “Star Trek” franchise. These episodes show that off in spades and continue the growth of “Universe” into one of the best genre offerings on television today–and possibly the best entry on the “Stargate” franchise yet.