On this week’s Summer of SciFi, the British Invader’s co-host Eamonn Clark looks at Doctor Who and the Daleks. 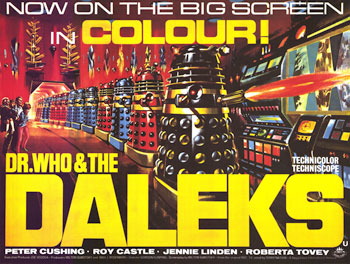 But the Daleks … well they’re real Daleks and they’re in colour!

When the BBC launched Doctor Who in 1963 it’s fair to say that even they were surprised by the audience response. It’s now well known that the Beeb had intended an educational show for families with their time travelling hero returning to various famous periods and meeting real historical characters. Interestingly this aspect of the show became less and less popular and was more or less dropped by the end of the 1960s, although it has returned in the recent re-launch. What really caught the imagination of the viewing public were the future stories with the increasingly bizarre alien races that would return to challenge the Doctor again and again. And none of these creatures was more popular than the machine dwelling Daleks with their single minded pursuit of galactic domination.

The Daleks were introduced by writer Terry Nation in the second story-arc of the first series and were an instant success. Something about their weird shape, their mechanical movement, their electronic speech or their implacable will attracted them to British children in the 1960s. Dalekmania had begun and soon the mobile pepperpots were appearing in comic books, on breakfast cereal boxes and making guest appearances on popular children’s TV shows like Blue Peter.

They were so popular that a film spin-off was probably inevitable and in 1965 it arrived in glorious technicolour. Terry Nation’s script for the first Daleks story was adapted by Milton Subotsky who was well known for his sci-fi and horror films with the Amicus studio. Subotsky and director Gordon Flemyng made several changes from the original which have irritated purists over the years. The Doctor is played by the famous British horror actor Peter Cushing (Grand Moff Tarkin himself!), however his version is not the renegade Gallifreyan Time Lord that we have come to know and love. Instead he is an eccentric English scientist whose last name is actually Who.

His appearance recalls William Hartnell’s portrayal of the first Doctor but Cushing’s version is a much kindlier and bumbling character. Susan, Barbara and Ian are all present but now both Susan and Barbara are the Doctor’s grand-daughters with Ian as Barbara’s hapless boyfriend. In fact the portrayal of Ian and Barbara is a major disappointment. The determined and brave schoolteachers from the TV show with their hinted at but restrained romance have become the comic relief, with Ian in particular being played mostly for laughs by the popular comedian Roy Castle.

Even the TARDIS has changed, it has lost the definite article and become simply ‘TARDIS’ a machine invented by Dr Who and not stolen from the Time Lords. The familiar central console has gone and been replaced by a room full of dangling wires and odd bits of machinery. It is still bigger on the inside than the out and bears its familiar blue police box design although the detail about the broken chameleon circuit is conveniently forgotten so the big blue box seems a bit odd. The film just assumes the audience knows why it’s shaped like that or that we will just accept that aspect of the myth.

The essential battle between the Daleks and the Thals remains the same but in all other respects the film has come to be regarded as that terrible thing in sci-fi geekdom: Non-canon.

So why watch it and why does it hold such a fond place in my memories? Well simply because for a long time it was all we had. Over here in the UK the BBC has a strange reputation for showing endless repeats of its TV programmes and yet re-runs of Doctor Who were few and far between. And of course there were no such things as VHS or DVD releases then. In fact as we discussed back in British Invaders 31 the BBC was actually scrapping its own copies of Doctor Who. But movies were different and were frequently trotted out by the Beeb to fill viewing slots in those long summer holidays. And that’s when I first encountered Doctor Who and the Daleks and its sequel Daleks – Invasion Earth 2150AD.

For a sci-fi child of the 1970s there up on the screen were those mythical creatures we had heard whisper of: The Daleks. We could see what all the fuss was about, and we could see them in colour. Of course with time we have been able to watch the original black and white TV originals and appreciate Terry Nation’s scripts and the performances of Hartnell et al. The originals make more sense and most importantly they are scarier. It’s easy to see why Doctor Who has gone on to be the longest running sci-fi show on TV. And like any long running story different versions of the myth emerge. Maybe we should just remember the two colourful films as simpler, gentler versions of the myth and enjoy them for what they are. They certainly thrilled me on many a wet afternoon.

Eamonn Clarke is one of the co-hosts of the British Invaders podcast all about British Science Fiction TV. In his spare time he is a doctor in Cambridgeshire, England. He was raised on a diet of Thunderbirds and Doctor Who, still has his membership card from the Spectrum reserve, is convinced that Captain Jack Harkness is really Captain Scarlet, and keeps on watching the skies waiting for his call-up from Cloudbase.