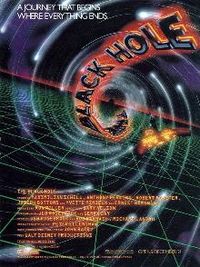 In the days before every home had a VCR (or two or three), cable outlets like HBO, Showtime and the Disney Channel helped some of us discover, rediscover or memorize certain movies and television shows. One of the giants of the genre, Blade Runner gained a large, devoted audience thanks to its run on cable. But for me, the genre film that I saw about a billion times on cable was The Black Hole.

I’d originally seen the film during its theatrical run. My dad was stationed in Hawaii and we lived on the Air Force base. The base theater was having a mid-week showing of The Black Hole and I somehow convinced my parents that this would be a great reward for my doing my chores and keeping out of too much trouble. They agreed and my dad and I headed out to the theater to see the movie. Because the movie was showing during the school week, this made it a double treat for me—getting to stay up late and seeing this movie I’d seen advertised on the back of comic books for what seemed like years. (It was probably only a month or two, but time is longer when you’re a kid).

The film was the talk of my elementary school class for the next couple of days, of course, I loved it enough to declare it “better than Star Wars” at the time and for my mom to buy me the book and record set of the film. Then we moved to Mississippi for a year and my parents installed cable with HBO.

And one month, The Black Hole premiered. Honestly, I’m not sure I ever saw the entire movie all the way through in one sitting during the months it aired. But I saw large portions of the second hour early mornings before school, in the afternoon after school when the homework was done and I was thinking about booting up the Atari 2600 and on weekend mornings when I didn’t value sleeping in as much as I do now as an adult. I gorged on the second half of the film, thrilling to the spectacle that is the Black Hole and loving the robots in the film. At several points in my young life, this was listed as one of my favorite movies of all-time. (Along with the first Star Wars, The Last Starfighter and a bunch of other movies I’ve long since forgotten).

Slowly, I grew bored of the film. After we got our first VCR, I remember seeing it for rent in the video store and thinking, “I’ve seen that so many times, I never need to see it again.” As many times as I saw it in that year period when it aired on HBO approximately seventeen times I day, I wandered away from it and didn’t come back to until the late 90s when the film was released as a wide-screen special edition on VHS. In a fit of nostalgia, I snapped it up and took a trip back down memory lane. 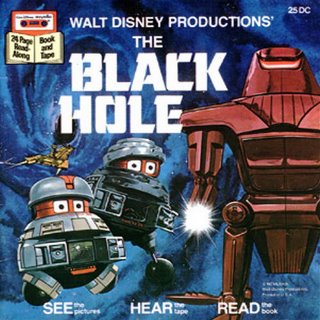 For those of you uninitiated, The Black Hole was Disney’s answer to Star Wars. It tells the story of an explored ship, the Palamino that stumbles across the long-lost ship, the Cygnus. The Cygnus is in orbit near a black hole. The crew goes on board to find its captain Doctor Hans Reinhardt still on board. Twenty years ago, Rehindardt refused an order to return to Earth and has been missing ever since.

Reinhardt is surrounded by robots, including the large, crimson colored Maximilian who has whirling blades for weapons and was pretty ominous to my young mind. Of course, we also had the heroic robots with our crew, VINCENT and BOB. VINCENT was kind of sarcastic in a dry way—similar to Spock on classic Star Trek (though at the time, I wasn’t watching classic Trek, yet).

The Palamino crew witnesses one of the robots limping and a funeral for one of the androids. Turns out Reinhardt wasn’t happy when the crew mutinied, so he lobotomized them and turned them all into robots. He’s got the same fate in mind for the Palamino crew because he has no desire to head back home and wants his secret to stay safe. The Cygnus is damaged by an escape pod crashing into it trying to escape and an asteroid storm. It begins to descend into the black hole and the several members of the Palamino crew die during the battle to get off the ship.

A few of them make it back, repair the Palamino and launch off the ship. But they can’t escape the black hole and plunge inside. They emerge on the other side and the film ends.

Looking at the movie again, I’m surprised at just how dark it is. For a Disney movie, you’ve got a lot of bad stuff going on from lobotomies for the crew to a fairly graphic (though pretty bloodless on-screen) death of one of the Palamino crew members. The concept of turning the crew into mindless robots is an intriguing one, but it didn’t necessarily register with me back in the day.

What did register were the robots and the action sequences. Sure, they weren’t R2-D2, but VINCENT and BOB made a big impact on me as a kid. A large portion of this could be the fact that we can understand what they’re saying. And there are some fairly elaborate laser battles that take place. One vivid memory is seeing our heroes run across a catwalk as a huge, flaming asteroid descends upon them. That scene made it to a lot of the trailers and seems to be one of the more iconic moments from the film.

Add to it a haunting score by John Barry (especially the main theme) and you’ve got a movie that had a definite impact on a young mind.

And even watching it again, years later, I’m still impressed by it. The first hour is a slow build of set-up with some intriguing concepts. And it firmly puts the foundation in place for the pay-offs in the second hour. The discovery of what Reinhardt did and the true nature of the robots is still memorable.

Visually, the movie is stunning. You can tell Disney spent a lot of money on the models and effects. The Cygnus is one of the one of my top five favorite space ships. Of course, following the mold of Star Trek: The Motion Picture, we get a lot of fly-bys of the ship early on, showing off the model work. The moments when the ship goes from seemingly dead in space to fully lit up is nicely realized and one of the few moments from early in the movie that I recall.

My big regret for the movie is that the DVD release isn’t much to write home about. My copy is a flipper disc with the full screen version on one side and the widescreen edition on the other. The film hasn’t been cleaned up at all and there are some signs of wear. I’m not sure the film is enough of a classic or well regarded enough by Disney that it could get a restoration, but I think it deserves one. Maybe when they do the reboot, we’ll get one. There aren’t a lot of extras on my version though the widescreen version includes an overture of highlights from the John Barry musical score.

The movie still works for me today and while I can’t quite recapture the excitement I had when I first saw it, I think it holds up fairly well. Yes, my movie tastes have changed and I no longer rank The Black Hole above Star Wars, but I still enjoy it. It’s a bit slower paced and more deliberate, but it’s still an interesting piece of entertainment. I often see the Alan Dean Foster novelization in used book stores and am curious about reading it. From what I’ve read on-line Foster explored and expanded a bit what the crew finds on the other side of the black hole.

But for now, I’ve only seen the movie—about seventeen zillion times. And I still love it to this day.

I just hope they don’t frak it up with the reboot.