This week, Susie the Southern Geek explores the original theatrical release of Battlestar Galactica, as part of our Summer of SciFi. 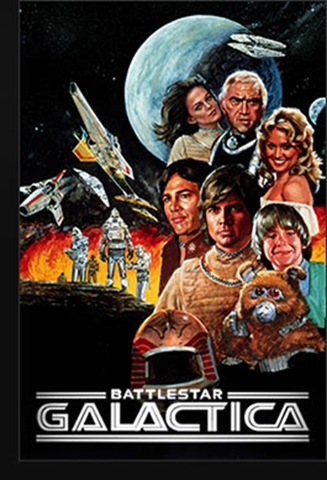 “There are those who believe that life here began out there, far across the universe, with tribes of humans who may have been the forefathers of the Egyptians, or the Toltecs, or the Mayans. They may have been the architects of the great pyramids, or the lost civilizations of Lemuria or Atlantis. Some believe that there may yet be brothers of man who even now fight to survive far, far away, amongst the stars.”

Sometime during the summer between my second and third grade years, I managed to convince my mother to take me (an only child growing up on a farm) and my best friend to see the new movie that everyone was talking about. My eyes were blown open  to the wonders of scifi through the spectacle that was the original Star Wars. Everyone I knew had watched that movie, and we all were filled with fantasies of traveling to distant stars and fighting evil enemies with lasers and spaceships. And, in those days of no VCRs or DVDs, we were limited to what we could remember from movies, books and television. So, when another space adventure was brought to television, I begged, pleaded and cajoled to be able to watch each and every episode, and when the  show came to town as a movie the next summer, it was a must-see!

My memories of watching the original Battlestar Galactica are hazy, but I do remember Lorne Greene’s steadfast authority as Commander Adama, Starbuck’s handsome roguishness (just right for a Han Solo lover like me) and Apollo’s reliability as the solid go-to guy. I remember Athena, the dark-haired, cool professional officer, and Cassiopeia, the golden girl who later became a nurse, and Sheba, who showed up later in the series and was a fighter pilot herself! And I wanted to be all of them, having adventures, flying spaceships and shooting bad guys. I spent many days pretending to re-enact each episode, shooting Cylons, and flying “fighters” made from cardboard boxes, tractor seats, tree trunks or nearly anything we could imagine into a spaceship. The barn became a “hangar bay” and farm equipment became essential parts of the “ship” that had to be protected from invading Cylons. And even though I was a girl, I always got to play the hero, because the Colonial fleet needed me!

I remember watching the story, fascinated at the new universe created and destroyed there. I was horrified when the planets and fleet were destroyed, and heart-broken when Apollo and Adama visited their home, reduced to rubble. I was hopeful when the fleet found Carillon, and still have vivid memories of the people trapped in the pods where the Ovions were using them as food. 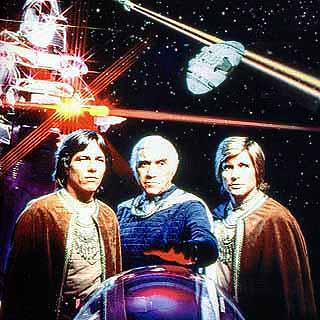 Watching now as an adult, the story in the movie version is a bit jerky, with edits from the original TV pilot and some action scenes from other episodes added in, so I often filled in some of the who and what for my kids. There were odd moments when you could tell segments had been rearranged or story had been skipped, but for the most part, it moved quickly enough that you could keep track of what was going on.  The acting, while a bit stilted at times, is often made up for by Lorne Greene’s solid comforting performance, and Richard Hatch kept you believing in the steadfast,  responsible Apollo.  The sets and costumes were pure 1970’s, especially in the casino, with disco balls and neon lights, feathered hair and velour jumpsuits, but they hold up better in this than most other 1970’s and even some 1980’s television offerings (I’m looking at you, Buck Rogers!). The iconic old Cylons, all chrome and shiny, weren’t quite as scary as they once were, but still looked good for guys in suits! The effects are still fairly realistic, considering this was made for television, and hold up almost as well as the original Star Wars. The action sequences, while exciting, do get reused a fair bit in this movie, and, at least on our television, sometime you can see the polygons around the ships where they had been added onto the background of space. And the vector graphic targeting computer and maps look very out-of-date, especially considering the level of technology that the Colonies had to have to create space-worthy craft.

The main story, however, is still there. The fleet survives the initial Cylon assault that destroys the colonies, the survivors escape as fugitives, and they find the hidden resort planet on which to refuel and recuperate. As a story, I still enjoyed the action, adventure, and mystery of the tale, and breathed a sigh of relief when the Colonial fleet escaped at the end after the destruction of Carillon and the base-star. My kids thought it a bit boring and old-style, with not as much whiz-bang action as they get nowadays, but I got a nostalgic kick out of watching it again.  Plus I had the added surprise of seeing Baltar get his comeuppance, which I did not remember previously from this movie – a definite bonus! I was amazed that I had remembered so much of it over the years, before watching it again as a series on VHS and then DVDs, and that it was pretty much as I had remembered it. For me, the rose-colored glasses were pretty clear. I remembered a classic story, framed within a creation of its time, and it is still enjoyable as a great product of that scifi revolution kicked off by the release of Star Wars.

Among the many copies and wannabees that came out in that time, Battlestar Galactica still stands out as one of the best stories and movies from that period. With the rebooted version of the series reminding us of the original, it is the time to celebrate not fantastic acting, explosive effects, or amazing visuals, but just a great story about the human spirit and its ability to fight to survive, and to celebrate the inspiration for many, many imaginary missions and adventures taken in barns, basements and treehouses everywhere, by kids just like me.

Susie the Southern Geek is the creator and host of the “How to Grow Your Geek” podcast. Her voice has appeared in many podcasts such as the Dollhouse Podcast, Angel Between the Lines, the Metamor City Podcast, Technorama and many more. Her show, “How To Grow Your Geek,” or HTGYG for short, is a podcast created to share a love of geeking and parenting, and to provide advice on how to combine the two.