The Fourth Season Infuses the Series With New Energy 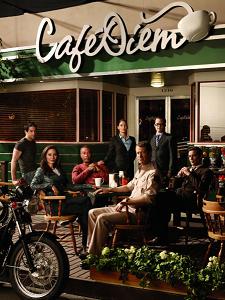 For three seasons, SyFy’s Eureka has developed a nice little formula for delivering a solidly entertaining summer time series. And while the formula for each episode still works, the fourth season looks to be shaking things up a bit–and that shake-up has infused the new series with some new energy and excitement in its first two episodes.

The first episode, “Founders Day” finds Carter, Allison, Fargo, Jo and Henry all zapped back in time to 1947 to the founding of the little town. There they meet with one of the town’s founders, Dr Grant played by new cast addition James Callis (Battlestar Galactica)

As the characters try to elude various authorities on the military base and find a way to get back home, the storyline gives us some quiet character moments with each of the five time travelers as well as doing a great job of introducing Dr. Grant. Some fans may groan that the on-again, off-again romance of Carter and Allison does its usual one step forward, two steps back in the episodes but using Grant as a potential rival for Carter makes sense and works well. A lot of this success rests with Callis, who is one of the strongest elements of these first two episodes.

And while the dilemma of the week can often fall into a formula, the strength of Eureka comes from its characters. And in these first two episodes, the characters shine again. Morton’s Henry is still the glue that holds the show together and Fargo still some of the best jokes and one-liners on the show. And, as always, some of the best scenes come in watching the various characters play off each other. Ferguson’s Carter and Callis’ Grant have potential and hopefully we’ll see more of these two together as season four progresses.