Season Two Picks Right Up Where The First Season Left Off 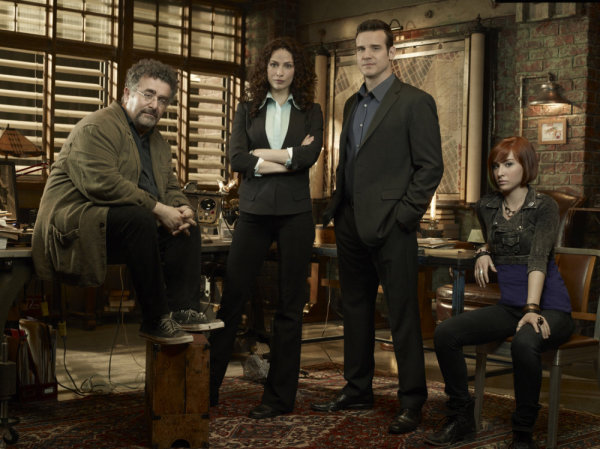 The last time we checked in at SyFy’s Warehouse 13, the Warehouse had been infiltrated by MacPherson with the help of Claudia (Scagliotti) and Artie (Rubineck) had been apparently killed when the tunnel leading out of the facility erupted in flames.

Season two picks up seconds after the cliffhanger to season one ended and quickly begins the heavy-lifting of putting elements back into place. “Time Will Tell” quickly resolves the cliffhanger surrounding Artie and reveals who was the apparent double-agent inside the Warehouse. The episode also unleashes a new potential recurring adversary for the season, who is released from bronzing by MacPhearson in order to steal some other artifacts from the visually stunning Escher room.

Myka and Pete set off in pursuit of the released figure to England while Artie heads to Cern to track down Claudia. Both locations lead back to the Warehouse and are the crux of the plan. The first episode is a fairly dense one, full of one plot twist after the other, all trying to resolve the various cliffhangers from last season as well as set up a few things for this year. It’s also greatly concerned with resetting the status quo in terms of various characters’ roles with in the Warehouse, which is a bit frustrating at times. Last season, it felt like the series was trying to break out of its episodic nature with the MacPherson storyline, but with “Time Will Tell” it appears that may be the exception and not the norm.

Of the two episodes provided for review, its the second one that is more solid and that feels more like an episode of Warehouse 13. Firefly fans will want to set their DVRs now for “Mild Mannered” as it features a reunion of Jewel Staite and Sean Maher from that series.

“Mild Mannered” finds Pete and Myka heading to Detroit to look into reports of a person with superhuman strength, the ability to fly and apparent invulnerability. The banter between all the characters works better in this episode where the stakes to the characters are lower (at times, Pete’s asides seem out of place given the gravity of the situation in the previous episode) and it’s a treat to see Staite and Maher back together chewing scenery. The who is behind the superhero doings in Detroit won’t necessarily shock you, but the series is working on a solid enough footing here that it won’t really matter.

Thankfully, “Mild Mannered” also addresses the impact that actions from the past two episodes would have on characters and their relationships. Artie is racked by guilt over what happens to MacPherson while the friendship between Claudia and Leena is strained. It’s not a deep arc and the show certainly isn’t going for Lost-like depths with the storyline, but it’s nice to see that some things won’t get swept neatly under the rug–even if it’s only for one episode.

“Mild Mannered” feels more like the show being in stride as it did down the stretch last year and is the more enjoyable of the episodes made available for preview.

Season two appears to be content to not rock the boat too much from season one. Given how enjoyable season one came to be in its second half, this isn’t a bad thing. As light, fun summer viewing fare, Warehouse 13 is just what the doctor ordered.