Starting today and continuing every Tuesday this summer, Slice of SciFi presents the Summer of SciFi. Inspired by the on-going meme in our Voicemail show, this series takes a look at some of the team’s favorite sci-fi and fantasy films. The movies will cover a full spectrum from established classics to forgotten favorites with one connection–they’re some of the movies that helped influence and grow our love of the genre.

Today’s review comes from Darcy Low, a Slice of SciFi and Dragon Page contributor.  Darcy is a frequent caller to our Voicemail show, as is her father Tim.  To kick off our series, Darcy has chosen to look at Conquest of Space. 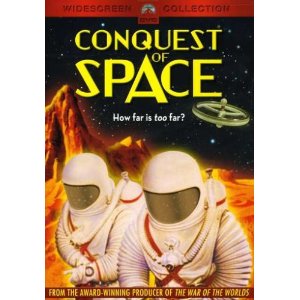 From the back of the dvd box: Retro sets, atmospheric music and an action packed story are highlights of this enthralling science fiction adventure, The commander of a flight to Mars, (Walter Brooke) endangers his crew when he gradually becomes obsessed with their precedent setting journey, cracks under the pressure; and attempts to sabotage the mission. Produced by innovated filmmaker George Pal (War of the Worlds, The Time Machine.) and directed by five time academy award nominee Byron Haskin (Treasure Island, Desperate Journey), This space exploration odyssey vividly illustrates the premise that no matter how advanced science becomes, human weakness remains.

The time is 1954, and Sci Fi movies are hot. Everyone is wondering what it would like in space, where can we go, what will we see, who or what will we meet? To me these are the best sci fi movies. because there was so much they just guessed at. Plus i LOVE the special effect and the spaceships. 🙂

And yeah I know, the acting always sucked. but sometimes, like this one, the story was the best thing.

In Conquest of Space, scientists and I guess NASA have built a giant space station out on space called “the wheel”, and they are going to use it for training and building spaceships to explore all over space. This is really cool when you think about it. This is like the space station we have now, plus last year’s Star Trek movie just  where they build the Enterprise out in space. these people were forward thinkers for back in the fifties, huh?

Now I am not going to poke too much fun at this movie, because it is really good. But the wheel? Its a large inner tube with a bowling pin stuck in the center… seriously. Heh, heh

Its been years now, and the scientists have build a giant triangle shaped spaceship, and have been training a crew to fly it to explore the moon. What’s cool is the movies shows how they have to watch what food they eat, and they eat food in pill form. Saves space and you have everything in those pills–coffee, cream, salads, beef, everything.

There is also a father and son aboard the space station, the father built the wheel and has been there since the beginning. The son has been off and on it, and has a new family back on earth he is wanting to go back to. His father has big plans for him and will not let him. After all, “there are worlds to explore out here.” The thing is, being out in space for long periods of time can effect people different ways, and sometimes you get what looks like the bends. Like deep sea divers get, and if not treated it can make you crazy. The father is starting to show signs of this.

The crew of the spaceship is really something. there is a Italian man who is very funny and is the radio guy, he is just a average guy who doesn’t understand all the fuss over everything. He’s from Brooklyn I think, and he is always in trouble. There is also a Asian man who is the plant scientist of the group, he feels that it might be possible that life can be grown on other planets. There is also another scientist ) played by the guy from the old tv show the Wild Wild West (remember Artemist? Anyway he is Romanian or Russian, and it’s very sad when his mother sends him off in a interview. The rest of the crew is made up of the father and the son. 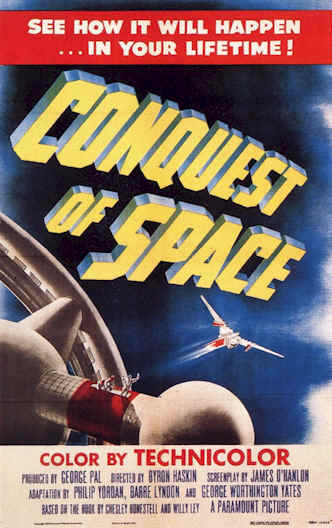 They all think they are going to the moon, until this guy from the government shows up and says they are going to Mars instead. Everyone is excited about it all and everything is ramped up. They get the ship all set and the are off to Nars!

Along the way of course, something happens. (something always happens.) and they have to send a man out to walk on the ship and do repairs (like the space walk guys do now. They even explain about how the ship might be flying at the speed of sound, but guys wont fall off because they are going at the same speed. which I always wondered about.) And of course a meteor storm comes up and one of the men get killed. (I won’t say who, but it’s really sad.) The father finally goes out in a spacesuit, and gives last rites–sending the body out into space. Something in the father finally snaps and he starts going nuts a little at a time. Could be what happened to the crewman, or could be because of what happened earlier, we never really know. They go on and finally land on mars.

Oh!!! I completely forgot. There is a stowaway on board. the sergeant from back on the space station was a old army buddy of the father, and when they start picking who will go to Mars, he just assumes he will too. When the father says he is far too old to go, he gets upsets and sneaks on anyway. This really messes things up, because of fuel, food and water has all been figured for so many people. adding one more person means less for everyone.

Once they make it to Mars and go outside to explore, they suddenly notice fuel is gushing out of the ship!! Everyone is outside except one person……yep you guessed it. the father has gone nuts. And is dumping all the fuel out and water. The son rushes back in and in a struggle the father is killed. (not really a spoiler, you knew this was going to happen.) The sergeant sees only the end of the struggle and blames the son for the death of the father. And he swears he will see him hang once they get back to earth.

With only a little bit of fuel left, and water running very very low. will they make it back to earth? Will the son prove his innocence? Will the rest of the crew trust him enough to take his orders seriously? Will they all die there on mars??

Heh, heh, I guess you’ll just have to rent it and see.

This a great movie, the acting is very good even for being this old. The special effects are good and my grandpa told me that a lot of things they did in the movie is what NASA does today.

This is good for everyone to watch too. There are no scary things, no bad words or anything else.

So if you are looking for a good old sci fi movie, rent or buy Conquest of Space. You’ll really will like it.

You can purchase a video on demand copy of Conquest of Space from Amazon or you can add the movie to your Netflix Queue.