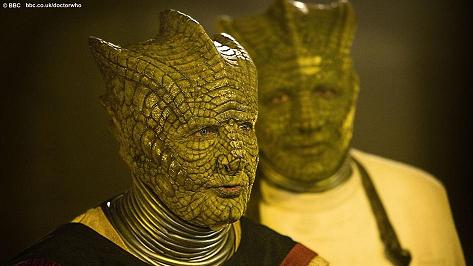 As I said last week, the episodes I was most looking forward to this year were “The Hungry Earth” and “Cold Blood,” if only to see the new series take on the Silurians.

The Silurians were some of the best man in a rubber-suit monsters from the original run of the show, if only because their desire to conquer planet Earth was one of the most interesting. They were the original inhabitants of the planet and after waking up from a long hibernation they felt they were entitled to resurface on their home world.

Yes, there were squandered by the sequel “Warriors of the Deep” in the 80’s, but I had high hopes the production team could give them back a bit of their dignity and grace with this new installment.

Essentially, the story is a retelling of the classic era Jon Pertwee installment with the Doctor being involved as a mediator between the two factions–humans and Silurians. The two sides are trying to see eye to eye and find a way to both share our planet, but there are groups within each faction who’s prefer this not to happen. There are also circumstances that eventually lead to the Silurians going back into hibernation since a meaningful co-existence can’t be worked out.

Watching the Doctor’s delight at seeing humans and Silurians at the negotiating table was a nice moment as was his indignation with the Silurian captive is killed and returned. The Doctor’s determination that a war won’t start between both sides is nicely done and well realized by Matt Smith.

And the conclusion where the Silurians head back to hibernation for a thousand years, asking the humans to prepare for the two to co-exist when they emerge again was the right balance of optimistic and heart-breaking.

It was really setting us up for the heart-breaking and shattering events to come.

It’s here that I’m glad I resist the temptation to read heavy SPOILERS for episodes. And yes, you can take this as the point for huge SPOILERS for the final moments and its implications for the rest of the season.

If you’ve not seen the episode yet, it’s best to not know what happens next….

When it comes to death of Rory, I’m glad I didn’t know it was coming. Interestingly, Moffat and company have been sewing the seeds for his demise since “Amy’s Choice” not only in its impact but also the tragic nature of it. Rory sacrifices himself to save the Doctor and as if that weren’t bad enough, gets erased from history and Amy’s mind by the crack in time.

When we saw Amy and Rory last week from a distance, I wondered why Moffat included them in that scene. It all comes full circle here as we see Rory is erased from history and from Amy’s mind in one of the most bleak moments the show has given us since its return. Many classic series fans will point to the death of Adric as one of the pivotal and memorable moments of the original series run, but seeing what unfolded here, there may be a new standard for the shocking and profound death of a companion. (Assuming, of course, we don’t find a way to bring Rory back at season’s end).

In Amy’s Choice, Amy realized she loved Rory and here she loses him. But she also loses her memory of him and it’s raised some interesting implications. Does the Doctor still know about Rory and what kind of havoc has been unleashed upon the time line and the universe with Rory’s erasure from history?

Thankfully, Moffat seems to have a plan for the crack in time and the silence that is following the TARDIS and the Doctor. And we get a new element to the arc with the Doctor reaching in and pulling out something from the other side. It leads to a cliffhanger that had me ready for the rest of the season and wishing I could mainline them all on DVD as soon as possible.

“Cold Blood” was an effective balance of a one-off story with some long-term implications for the show as a whole. It’s set the table for the final run of episodes this season and if Moffat delivers as he has so far, we’re in for something great.