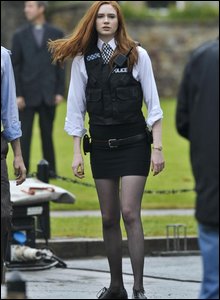 Since the series debuted in 1963, “Doctor Who” has been no stranger to controversy.

That tradition seems to extend to the latest season of the show, led by new producer Steven Moffat.

The British newspaper the Telegraph reports that some fans are complaining the show is “too sexy.”

If you haven’t seen the first installment of the Matt Smith era and are waiting for the U.S. debut on BBC America, stop reading now.

Some of the complaints stem from the fact new companion Amy Pond is working as kiss-o-gram when she encounters the Doctor and that she wears a short skirt.  They also object to the new Doctor changing clothes in front of Amy and her boyfriend at the end of the episode.

One reader said : “Why did she dress up as a tarty policewoman? Surely that’s not fitting for a family show.’

As a long-time “Doctor Who” fan, I must respond.  Please note that all comments made after this point are only those of myself (Michael Hickerson) and do not reflect the views of Farpoint Media and Slice of SciFi as a whole.

Honestly, I think a lot of people are getting their noses out of joint for no good reason.   Even back to the classic run of the show, female companions were showcased as sexy women “for the dads.”  (See also: the fourth Doctor’s companion Leela, who was from a race of warriors and she wore little more than a leather swimsuit throughout most of her travels in the TARDIS).

And the outfit Amy wears in “The Eleventh Hour” is no more or less revealing than much of what Nicola Bryant wore during her first year as Peri.

More recently, the show introduced and gave us Captain Jack Harkness, who while he grew into a more in-your-face character on “Torchwood” was still kind of out there in terms of his own sexuality on the show.   We also saw just as much of Captain Jack in “What Not to Wear” parody scenes in “Bad Wolf” as we saw of the new Doctor here.