A Solid, Dark and Compelling Return 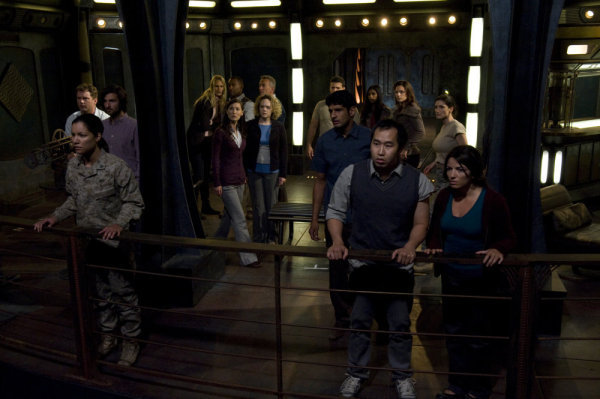 Picking up where the mid-season cliffhanger left off, “Space” and “Divided” find the crew of the Destiny splintered over Colonel Young’s decision to leave Dr. Rush behind on the alien planet at the end of “Justice.”   Tensions from the previous episode and the season long story arc come into greater focus, with some thinly veiled threats by Camile and a lot of debate among the crew on whether or not leaving Rush behind was a good idea.

Things get a lot more dicey for the crew when the communications stone malfunction and Young finds himself aboard an alien space ship.   The ship quickly finds Destiny and launches in an attack on the ship, leaving Young and the crew scrambling to communicate with the alien crew and find a way to launch a counter offensive.

Continuing the movement we saw in the first half of season one, “Space” follows a dark and compelling storyline with the crew of Destiny desperately missing Rush and struggling to survive without him.  The show throws in some nice character moments, including one where recurring character Vanessa James makes some comments about her attraction to a fellow crew-member over an open comm channel.   The moment is played for an awkward laugh, but has an impact and a nice reveal later in the storyline.   It’s a nice character moment for all those involved and it helps underline some of the mind sets by the people aboard Destiny.

As for the main storyline, things are beginning to pay off here in these first two episodes.  Again, fans who liked the first half of the season will eat up what’s happening here. Those detractors who don’t like “SGU” will probably find the same things to complain about that they did in the first half of the year.

Visually the episodes are stunning, especially “Space.”  The stories find a solid balance between the alien threat (which doesn’t go away at the end of the episode) and character development.   As I said in my first review, this ain’t your daddy’s “Stargate” and the franchise is making some great strides forward into darker territory and greater character depth.

The biggest criticism of the episodes is that they hit the reset button a bit too quickly in terms of returning certain things to the status quo.    But while the circumstances are the same, it’s that tensions surrounding the decisions made and that status quo that will keep fans interested as the rest of the season unfolds.