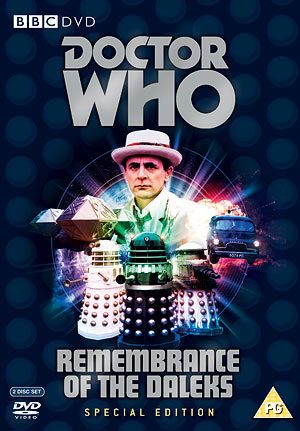 A near-perfect release of one of the best stories in the “Doctor Who” canon.

Produced as the kick-off to the 25th anniversary season, Sylvester McCoy’s “Remembrance of the Daleks” was one of the first classic “Doctor Who” serials to hit DVD–and one of the most problematic.  Copy right issues kept the DVD release from using certain musical cues within the program and there were issues with some of the effects sequences in the initial releases.  Also as one of the first in the range, the extras were a tad bit lacking in comparison to what we get today, consisting of just a commentary and a few cut scenes.

Easily one of the most popular seventh Doctor stories, “Remembrance” deserved a better release and now thanks to a new special edition, it’s finally got the release this classic serial deserves.  The musical cues have been restored, the picture has been upgraded and the sound quality is better than ever.  In short, this is one of the rare double dips that is actually worth investing your hard earned cash for.

Written by Ben Aaronovich, the serial finds the seventh Doctor and Ace traveling back in time to 1963 to take care of some unfinished business.  It seems the first Doctor left something behind and two factions of opposing Daleks want to get their hands on it.   The Doctor must balance the opposing Dalek forces as well as various humans caught up in the epic struggle as he attempts to ensure the side he wants to have the mysterious Time Lord artifact is the one that ends up with it.

The serial kicked off an anniversary season and the homages to the series are numerous.  The Doctor and Ace arrive at several of the original settings from “An Unearthly Child” and there are Easter eggs galore for long-time “Who” fans.  (There’s even one huge meta shout-out that still has fans debating to this day).   The story also brings together a variety of threads from all across the Dalek stories of the classic series in a script that delighted old-school, hard-core fans but is still accessible if you haven’t seen everything that led up to it.  It also features the first on-screen confirmation that Daleks could hover at the end of episode one.   It’s almost impossible to convey just how series-changing and earth-shattering the episode one cliffhanger of a Dalek pursuing the Doctor up the stairs really was when this serial first aired in 1988.

Extras-wise, the special edition is a nice upgrade on the original release. The original extras have been moved over and we get a couple of new short documentaries on the making of and developing of this classic serial.  Unfortunately, with the special edition tag comes a special edition price tag–mostly for a second disc that has one extra examining the history of the Daleks’ creator Davros.  This extra was part of a Davros box-set in the UK and while it’s nice to see, I’m not it’s worth making this release a two-disc set.  Odds are that it’s one of those things you’ll watch once and then never really dust off that second disc again.

But I suppose a bit of an extra price tag is worth it to finally have this classic serial get the release it deserves on DVD.

If you’re an old-school fan, this is a must have.  If you’re a new series fan, looking for some hints about the Time War, you’ll find them here as well.

A near-perfect release of one of the best stories in the “Doctor Who” canon.