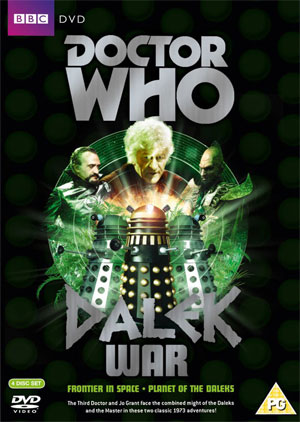 The restored version of episode three of “Planet of the Daleks” is worth the price of admission.

For a variety of reasons, releases of Jon Pertwee era “Doctor Who” stories have been few and far between of late.  Part of this is due to the fact that many of the remaining stories require a lot of work to get up to DVD standards.  But with the end in sight for the release of classic “Doctor Who” on DVD, it appears the dam may be getting ready to burst when it comes to the third Doctor’s era getting equal representation on DVD.

That is certainly the case of the United States where we’ll get at least four Pertwee stories in the first several months of 2010.   Later this year, we’ll get the “Peladon” stories and earlier this month saw the U.S. release of the Dalek War box set.

The Dalek War in question is a made up of two six-part stories from the series’ tenth season, “Frontier in Space” and “Planet of the Daleks.”  In “Space” the Doctor and Jo arrive in the far future to find two empires–that of Earth and that of Draconia–are close to war.  The two sides are being played against each other by the Ogrons and the Master, though there is a greater threat lurking out there.  (If you can’t guess, check out the title of the box set).

“Space” is famous in “Who” lore as the final appearance of Roger Delgado as the Master.  As always, whenever Delgado is on-screen, the story works on a different level.  On the other hand, “Space” is one of those six-part stories that emphasizes the limitations and criticisms of longer “Who” serials–namely that they’re padded to the extreme.  This is especially true of the first three episodes that consist of the Doctor and his assistant Jo Grant being captured, locked up, escaping and the being captured again.

“Space” is also infamous for its lack of cliffhangers.  Episodes just seem to end abruptly with no rhyme or reason and, sometimes, as the least suspenseful moment possible.

Things pick up a bit with “Planet of the Daleks” as the Doctor has thwarted the pepperpots first plan but pursues them across time and space to discover the real plan the metal monsters have hatched.  Written by Daleks’ creator Terry Nation, “Planet” is again a story that’s a bit bloated at six episodes but still works a bit better than “Space.”

“Planet” also contains the biggest selling point for this box set for classic series fan–episode three is finally restored to its full color version.   For those of you who may not know, episode three was dumped as part of the BBC purge in the mid to late 70’s and while a black and white copy has been around for years and was part of the VHS release, anyone who’s seen the story after its initial broadcast has either seen part three in black and white or not at all. (In some syndication packages, it was simply skipped entirely).

Now the Restoration Team has finally restored the color using two different technologies–one is the old fashioned colorization process and another is a new technique that extrapolates the original color signal from the black and white print and restores it.  Both versions have been combined to produce a episode three that looks as good as the other five.  One of the DVD extras delves into how this was done and it’s fascinating–easily one of the sets best extras.

Speaking of the extras, it’s here this set excels.  Again, most “Who” fans will consider the biggest extra the restored color in episode three. But it doesn’t end there.  The set includes a documentary that looks at the production of both serials.  It’s split across the two releases and is a fascinating look at how both shows came to be.   There’s also commentary on both stories that is nicely balanced between the production team and the actors, giving us an interesting look at these two stories.  They’re not quite classics of their era, but they’re still interesting examples of what the Pertwee era team was trying to do.

The only major complaint is that the commentaries are moderated by Clayton Hickman, who does a decent job at times, but often times tries too hard to insert himself into the conversation.  Certainly on a six-part story, a bit of guidance is needed but Hickman tries too hard at times.  I suppose it’s better than Katy Manning rambling as she has on previous releases, though.  Also, this one may be bittersweet to some older “Who” fans as it will be one of the last we get with producer Barry Letts, who passed away earlier this year.

While not quite as series-rattling as this month’s re-release of “Remembrance of the Daleks,” the Dalek War box set is worth the price of admission for the restored third episode of “Planet of the Daleks” alone.  Certainly there are better Pertwee stories out there, but there are few with as much ambition as these two.