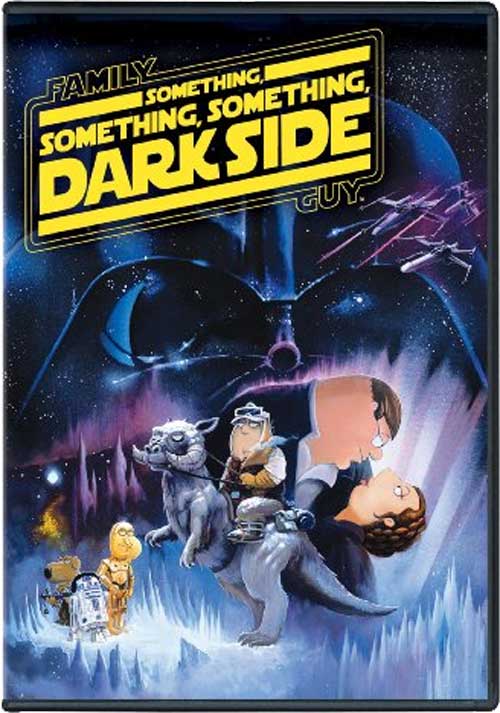 Seth McFarlane brings his trademark humor to the Star Wars universe yet again, but like most sequels, the second trip to the well doesn’t bring back the results audiences were hoping for.

This time McFarlane pokes fun at what many fans of the Star Wars universe consider the Holy Grail of the franchise, The Empire Strikes Back. Perhaps it is the strength of Empire itself, or that tired feeling of been there, done that left over from “Blue Harvest”, regardless “Something, Something, Something Dark Side” doesn’t roll out the laughs like it should.

Don’t get me wrong, that isn’t to say the new Family Guy Star Wars episode is not funny. The show starts out particularly strong, ripping on Twentieth Century Fox for giving George Lucas rights to the Star Wars merchandising and sequels, comparing the blunder to canceling Family Guy twice.

However shortly thereafter, “Something, Something Dark Side” falls into the typical McFarlane pratfall of repeating obnoxious jokes until you can’t help but muster up a single chuckle. One prime example, a rebel soldier who keeps interrupting pertinent conversations taking place on the Hoth hideaway, declaring that he “brought that bag of ice you’d asked for.”

Other moments though, McFarlane does a great job playing off the dialogue of Empire. Right before the battle of Hoth when Luke asks his gunner, Dak, how he is feeling, he boldly states, “I feel like I could take on the whole empire myself”. Clearly a line foreshadowing the character’s quickly approaching death, McFarlane takes it one step further. Chris Griffin, playing Luke, tells his fellow Rebel pilots that Dak has this one. The lone pilot flies off into space to take on an army of Star Destroyers by himself and, well, I think you can guess what happens next….

While” Something, Something Dark Side” continues its hit and miss structure for the rest of its running-time, the BluRay release leaves one with hope thanks to a special feature in which McFarlane performs a table read of the upcoming Family Guy spoof for Return of the Jedi. Hopefully a weaker film, filled with those blasted Ewoks, will prove to be the fertile comedic ground McFarlane was hoping to harvest from “Something, Something Dark Side”.