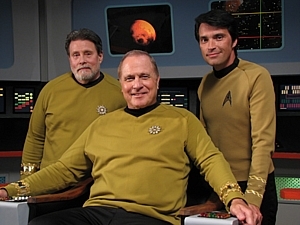 Gerard, best known for his role as Captain William “Buck” Rogers on the popular television series, will play Admiral Jack Sheehan.  Sheehan who sends James T. Kirk and the Enterprise on their mission into the Klingon Empire.

The cameo came when Gerard dropped by the set of the new on-line Buck Rogers series to check things out.  He stopped by the sets for the original Enterprise NCC-1701 and quickly accepted the cameo role.

“Damn you! You’ve brought me over to the dark side!” the actor joked.

Probert will play Commodore Prober, who was referenced by not seen in “Star Trek: The Motion Picture.”  Prober was a designer for the movie as well as working on the design of the NCC-1701D for “Next Generation.”

“Andy offered us the use of a new Klingon fighter he’s designed,” said Senior Executive Producer James Cawley. “We’re really excited to have him aboard for “Kitumba”.”