Consistently misses the comic beats it sets out for. 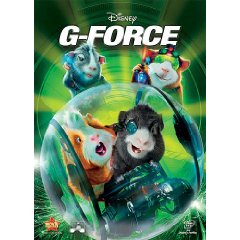 If the concept of super-spy guinea pigs seems juvenile to you, there’s a reason. Special Effects guru turned writer/director Hoyt Yeatman may have penned the screenplay and brought G-Force to life under the supervision of one of Hollywood’s most successful producers, Jerry Bruckheimer, but the inspiration for the flaccid action comedy came from none other than Yeatman’s prepubescent son.

Yes, the story of specially trained, operative guinea pigs dispatched to take down a maniacal, billionaire super villain came from a boy who thought it would be interesting to watch a movie from the perspective of characters the size of his GI Joes (Apparently he never saw Small Soldiers). Don’t take my word for it though; it’s on the special features of the BluRay.

While the action vehicle has all the slick effects and whiz-bang action you’d come to expect from a Bruckheimer production, it consistently misses the comic beats it sets out for. On a behind the scenes tour of their special effects facility, writer/director Yeatman takes viewers through the process of animating the characters and action in G-Force. Watching the helmer in action, the knowledgeable and paternal filmmaker comes across as quite dull. Sure, he has been responsible for crafting some of the most beautiful effects in Bruckheimer’s blockbusters, but watching him interact with his fellow animators, it quickly becomes clear how he could make the likes of Jon Favreau and The Hangover’s Zach Galifianakis completely unfunny.

If you can shut your brain off and enjoy the incredible animation and stylish visuals, made even better by 1080p BluRay, perhaps you can get through the nagging, grating feeling that there could have been some comedic potential in G-Force. However, even then, you can’t help but feel the film ultimately exists as a big “F-you” to Michael Bay for ditching Bruckheimer and Yeatman to pursue Spielberg, ILM and those lucrative transforming toys.