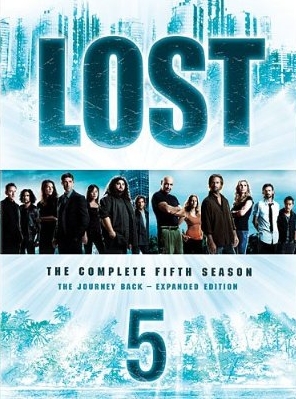 The survivors of the Oceanic Flight 815 are back for a fifth season on DVD and BluRay and once again Buena Vista Home Entertainment has outdone themselves with an outstanding set for one of the best shows on television. A five-disc collection, packed with phenomenal audio and visuals and a girth of extra features, Lost Season 5 is the perfect holiday present for the TV obsessed nut in your family.

Moving the franchise even further into the realm of science fiction, producers took a chance with Lost Season 5 introducing a time travel element that ran the risk of turning the already complicated narrative into a jumbled mess. Luckily television’s most engaging drama walks the delicate balance and continues to surprise audiences as it races towards its sixth and final season, concluding next May.

While this new element allows producers to explore the islands history, what might be concerning to some is that the fifth’s seasons best moments come from stories that take place off the island. The season’s strongest episode, “The Life and Death of Jeremy Bentham” takes audiences away from the island for the majority of its duration! While the 5th Season is entertaining, maybe this is a sign that wrapping up the show up within the next sixth months isn’t such a bad idea after all….

BluRay owners who pick up Lost Season 5 will be privy to an innovative BD-Live special feature called “Lost University”. Opening a week after the set’s release, the feature allows consumers to pop online to enroll in a collegiate Lost experience, exploring themes, stories, secrets and more. Whether or not this new concept will enhance the BluRay experience or wind up a cheap gimmick remains to be seen until the feature goes live, but it certainly has the potential to beef up the replay value of the disc, which otherwise is rounded out by a decent amount of, but relatively standard issue, deleted scenes, making of and behind the scenes interviews.