“Revolutionizing the medium, Snow White is one of Disney’s most memorable and charming titles. Setting the standards that would become expected from the animation titan” 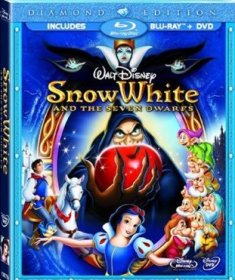 The Great Depression. Animation was used as escapist entertainment; silly little vignettes to take people’s minds off how bad things were in the country. Walt Disney, ever the dreamer, decided that more could come from the Technicolor process, and decided to push the boundaries of animated storytelling with his first feature, Snow White and the Seven Dwarfs.

Revolutionizing the medium, Snow White is one of Disney’s most memorable and charming titles. Setting the standards that would become expected from the animation titan, Snow White features memorable characters, story and music.

The story a young princess trying to escape the wrath of an evil queen is still as effective today as ever, and the wicked witch is still just as terrifying. The debut film under Disney’s Diamond Animation Collection, Snow White packs a wallop. As far as visuals and audio are concerned, this is a BluRay to help showcase the power of the technology. Taking to heart some of the flaws from the previously released animation BluRays like Sleeping Beauty and Pinocchio, Disney has cut back on the digital scrubbing with Snow White, and the result is impressive. You can see all the detail in the animation, even down to the brush strokes. While the disc expectedly features some new documentaries on the making of the film, perhaps what will be most exciting for audiences is the discovery of new storyboards that suggest that Walt Disney was indeed working on a sequel for the beloved classic! The new release also features many of the well-rounded features from the previous, Platinum release of the film.

However, consumers should be aware of a new marketing tactic Disney is employing with this spectacular release. Not only is a DVD of the film included with the BluRay release, but a BluRay is included with the DVD release too! So that means, no matter which packaging you buy (BluRay cases are smaller than standard DVDs), a high definition disc is getting into your home. Collectors should be wary to buy the one that fits your shelf.