“Why should a Sci-Fi fan, such as you, be interested in a Bromance?
Well the benefits of this genuinely endearing comedy are twofold. 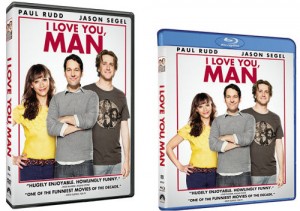 Yes, I Love You, Man is far from being a science fiction film, or any kind of a “genre film” for that matter, but the Paul Rudd/Jason Segel vehicle is more than an average romantic comedy, it cements the coming of a new genre, the Bromance.

Why should a Sci-Fi fan, such as you, be interested in a Bromance? Well the benefits of this genuinely endearing comedy are twofold.

First, the movie is filled with big laughs from lovable characters. Secondly, the movie works on multiple levels, playing to females looking for mushy romance, all the while respecting The Dude in the audience. Point being, I Love You, Man is a fantastic way to spend date night.

After proposing to his fiancé Zooey, Peter (Paul Rudd) realizes he doesn’t have a Best Man to stand beside him at the alter. In fact he doesn’t really have much of a groomsmen party at all. Determined to find a new male companion, the awkward and shy Realtor goes on a series of “Man-Dates” in attempt to discover a new best friend.

When the loud and gregarious Sydney Fife crashes one of Peter’s open houses, the two spark a friendship filled with time spent rocking out Rush, watching DVD’s, and bonding in “The Man Cave”. When Zooey becomes jealous of Peter’s newfound friendship, Peter must choose what is more important: His wife-to-be or his new pal.

Filled with a fantastic supporting cast that includes Andy Samberg, Jon Favreau, J.K. Simmons and Lou Ferrigno, I Love You, Man is a Comedy that nearly every guy can relate to.

Who hasn’t felt awkward when thrust into a situation where you are forced to befriend other men who are nothing like you? How refreshing is when you find a group of pals that you can be yourself with? I Love You, Man explores these questions, and the answers the John Hamburg comedy provides are as hilarious as they are truthful.

Unfortunately, the Blu-ray and DVD don’t offer nearly as much extra content as you would need to fall in love with the disc. Aside from an average, talking-head “making-of” segment, deleted and extended scenes round out the disc.

So why gouge your eyes and ears out with another painful Rom-Com? (And don’t say you never watch them, because we all know at some point you do.) I Love You, Man is perfect for a rental with that someone special, and will easily please both parties. Go on, enjoy the Bromance.