“Identity crises and mediocre special effects aside, the performances are what carry Race to Witch Mountain.” 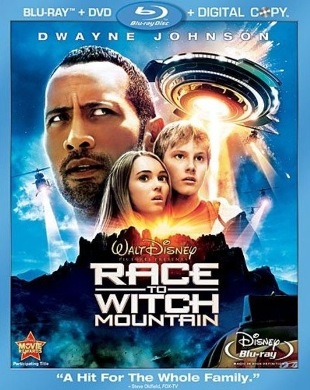 There is no doubt about it; Dwayne “The Rock” Johnson is a movie star. And the physically imposing actor’s star shines the brightest when he is busting heads. Sadly though, having Johnson do what he does best in mediocre, family action flicks doesn’t exactly put his skills to their greatest use.

Race to Witch Mountain could have been so much more. The science fiction franchise with a Disney pedigree was a property that was certainly ripe to be remade, however the limited budget (at least for a studio action film) that Andy Fickman was given limited the imagination and creativity the project could have had, and when you try to put a cap on extraterrestrial imagery the viewer never wins.

Starring Dwayne Johnson as Las Vegas cab driver, Jack Bruno, Race to Witch Mountain follows the classic, wrong place, wrong time formula. When two seemingly normal teenagers hop into the back of Jack’s cab, the driver is whisked away on an otherworldly adventure after realizing his customers are aliens. Now, Jack must not only protect his young passengers from a war mongering bounty hunter, but also from government agents threatening to turn his fare into a science experiment.

Fickman had a big challenge following up the beloved Disney classics, Escape to Witch Mountain and Return From Witch Mountain, especially filling the acting shoes of Donald Pleasance and Christopher Lee. While everyone does his or her best with the update’s benign script, the film’s inconsistent tone is often its downfall. Is it meant to be funny? Is it meant to be B-movie camp? Should it be action packed and intense? One minute Johnson is making kid-friendly animal jokes, the next he is bashing gangsters’ heads! And don’t get me started on the visual homage to Predator in the sequences featuring the bounty hunter, Siphon. Fickman got all the visuals right, but with none of the intensity!

Identity crises and mediocre special effects aside, the performances are what carry Race to Witch Mountain. With a supporting cast that includes Carla Gugino, AnnaSophia Robb, Ciarán Hinds and Tom Everett Scott, you can at least expect decent acting, despite inconsistent material.

Disney has continued it’s unprecedented BluRay packaging, giving consumers the option to watch the movie in either high definition, standard def or via a digital copy, all with one convenient purchase. This alone should make families consider consuming Race to Witch Mountain, however be forewarned that the extra features leave much to be desired. A trivia track, deleted scenes and bloopers are hardly conclusive, making Race to Witch Mountain the perfect rental, but certainly not an out of this world purchase.