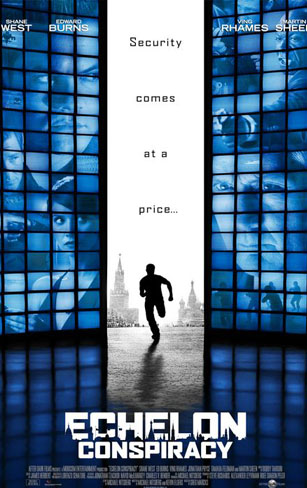 With the Paramount DVD premiere The Echelon Conspiracy, the Dark Castle produced thriller has all of the trimmings for a big theatrical release, but finds itself debuting at home, not for its lack of trying, but for its similarity to last year’s Paramount conspiracy picture, Eagle Eye.

Starring Shane West, Ed Burns, Ving Rhames and Martin Sheen, this techno charged thriller pits an unlikely hero caught in the midst of a global conspiracy. When Max Peterson (West) is delivered a snazzy, state of the art cell phone that promises untold wealth, he ignores it.

However when the mobile starts accurately predicting major news events, Max starts to listen, and the money starts pouring in. Quickly, Max catches everyone’s attention from Russian casino owners to the NSA unraveling a global conspiracy that threatens the foundations of the safety and privacy of the entire world.

Directed by young, up-and-coming filmmaker Greg Marcks, Echelon Conspiracy not only boasts an impressive cast, but thrilling visuals, dazzling locations and exciting action. Marcks clearly has an impressive directorial eye that will carry him a long way.

Performances are top notch as well, with Ed Burns and Ving Rhames doing the bulk of the heavy lifting. Literally the only thing holding the Echelon Conspiracy back is its all too similar tone and nature to the 2008 thriller Eagle Eye, which deals with familiar themes and villainy.

While the disc doesn’t feature any bonus features, The Echelon Conspiracy is such a taught ride, it’s more then worth a rental.