“Never one to make cookie-cutter television, Whedon’s Dollhouse is certainly not of the norm.” 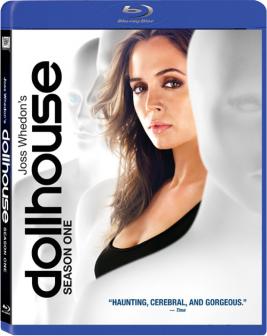 From the mastermind behind Buffy the Vampire Slayer, Angel and Firefly, Dollhouse is Joss Whedon’s latest television achievement, and the ambitious science fiction program has his loyal followers torn. However, with the release of the first season of the mind-bending show hitting DVD and BluRay, fans are given the chance to re-evaluate the Eliza Dushku vehicle.

Never one to make cookie-cutter television, Whedon’s Dollhouse is certainly not of the norm. As an “Active” one must serve as an unwitting agent of Dollhouse, an illegal, underground organization that serves as a playground to elite clientele by offering programmable human beings. Echo (Eliza Dushku), is one of those humans. Reprogrammed nearly every episode to fulfill a fantasy or accomplish a dangerous task, Echo is faced with the challenge of eliminating a rogue Active who is out to bring down Dollhouse forever.

While Dushku attempts her best at playing a reformatted character every week, the daunting challenge set by Whedon’s ambitious show tore fans right down the middle, calling a bulk of the program’s remaining characters unmemorable. However, one can’t deny the show’s ingenuity and creativity. With the original unaired pilot and bonus episode, “Epitaph One”, fans should be more than occupied as they turn their hopes to a second season, one that will hopefully fix the flaws of the first.