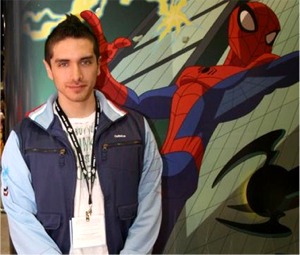 Special Segment: Kurt in St. George looks at the next step after a “ViewMaster” movie.

li>Before he passed away, John Wayne worked on a sci-fi movie.  The film was never released and is coming to DVD later this year….

Slice of Trivia: This week Kurt in St. George tests the studio crew and you with three new clips.   Email your clips to Kurt at sliceoftrivia@gmail.com. Your entries could get picked and played on the show.

TV Talk: Once intended as a big-screen film, it looks like Stephen King’s novel “Cell” is headed for television as a mini-series.

Interview: This week, we talk to Josh Keaton.  You might know him better as the voice of Peter Parker and Spider-Man on the animated series, “The Spectacular Spider-Man.”  The series is currently in its second season on Disney XD.