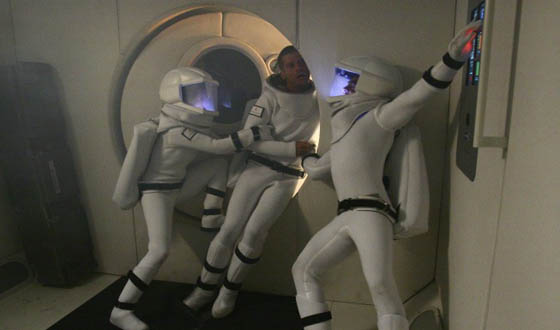 A writer for Star Trek, Battlestar Galactica and Caprica, the co-creator of Fox’s Virtuality describes his show’s grounding in science and its “New Orleans funeral” of a pilot.

Q: Both Caprica and Virtualty deal with the virtual world. What’s the attraction for you?

A: It’s interesting. Virtual reality is actually becoming a much bigger theme in Caprica than we may have imagined. I wonder if that’s partly the influence of Virtuality, but it’s certainly something that’s on my mind and on Ron [Moore]’s mind. I guess in some way we are already there. All good science fiction finds a chord of resonance in contemporary experience. I think Battlestar was very much political. Virtuality strikes a more technological chord in terms of where our culture is. If you’re like me you were wondering what Apple’s new iPhone was going to be; it’s just a frakking phone, but nevertheless it consumes us. I think that’s an interesting theme right now.

Q: Like 2001, Virtuality borrows from logistical concepts of space travel. How much consultation did you do with NASA?

A: I did consult with a NASA scientist. And they already are thinking in those terms — a long mission to Mars for example, where you’ll need to keep mission critical skills sharp. Beyond that, the idea that people are going to need outlets — you’re stuck in a tin can with a few other people, how are you going to manage psychologically? The spacecraft, you mentioned 2001, the progenitor of our spaceship is the project Orion craft, which has been around for decades. I did not want warp drive, some make-believe fantasy thing. How might we actually do this? The Orion project is a very practical approach about how we could get a ship up to a very high speed — essentially by setting off giant bombs behind the ship.

Q: The concept of the virtual reality allows you to write a different show every time — the pilot, for instance, has a Civil War environment. What’s that experience like as a writer?

A: I’ve been doing that since my first days in scifi television, writing for Deep Space Nine and Voyager. And I had that same sense then — one show could be a doctor show, a cowboy show, a police drama, a mystery thriller. What’s most interesting for me is the extent the virtual reality is an expression of the characters. For the Civil War environment, if we have a chance to continue the show, we’ll understand why Pike has chosen it. There’s a reason. It’s 12 people stuck in a ship, but the environments are limitless. The world is in one sense closed, but in terms of virtual reality opened up.

Q: Which is, in a strange way, the opposite of BSG where the world was very much contained.

A: Right. In Battlestar, despite a much larger potential field to draw characters from, in some way you assumed you had met the key players — they were your players, and we weren’t going to run into any aliens. Virtuality seems more contained and closed, yet can reach out in a whole different direction.

Q: What are the chances Virtuality will become a series?

A: Honestly, slim to none. I’ve been through too much drama with this show already to go through more funerals in my head for it — it’s too traumatic. They have not made an official word, but they’re scheduling it on a night that I think has been characterized as the butt-end of the television universe. It’s sad for me and Ron — they said, “Hey come aboard. We love what you do.” And then we did what we do, and they went, “Ooh, s— man this is kind of much for us.” Given the scheduling time and the lack of promotion, call it a New Orleans funeral: We’ll be having a good time, and we’re grateful people at least have the opportunity to see what we did.

Q: Is that one of the reasons why Caprica is now more focused on virtual reality?

A: I think there’s a sense on both Ron’s part and my part that if we were not going to get to explore it in Virtuality, then we’re going to explore it here. Caprica is going great. It’s an area that’s really compelling — the question of how technology is going to change us. But we’re examining a whole world, a whole culture as opposed to Virtuality where it’s like a petrie dish — 12 Earthlings in a spaceship.

Q: What would your virtual reality be?

A: It might just be a reality where time stops and my mind speeds up, so I can just catch up on my writing. It’s a more mundane use of virtual reality. Maybe I’d try to find something more exciting, but I typically try to find that in real life if I can.