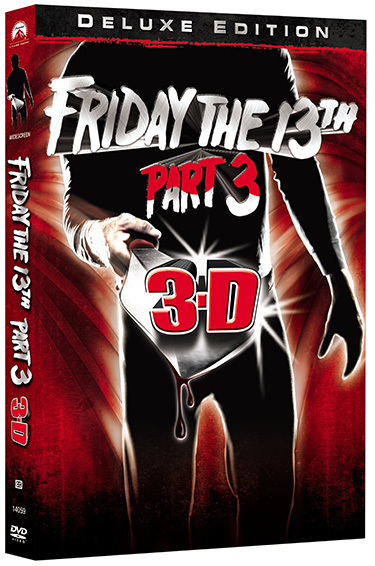 Accompanying the release of the Michael Bay produced, 2009 remake, Paramount Home Entertainment has decided to re-release a handful of the classic Friday the 13th titles, some for the first time on BluRay, others on DVD in remastered high definition.

One of horror’s most pervasive juggernauts, Jason Voorhees has always walked the delicate balance between slasher camp and sheer, machete-wielding terror. While the most recent Friday the 13th collaboration between Paramount, New Line and the aforementioned Michael Bay, via his Platinum Dunes production company, takes its mythos quite seriously, revisiting the great times had at Camp Crystal lake during the eighties is a real treat.

First up, Friday the 13th Part II and Friday the 13th 3-D get the grand BluRay treatment. Having an increased budget from the pennies Sean S. Cunningham seemed to rub together to create the original Voorhees thriller, both sequels are visually stunning on BluRay HD thanks to the producers being able to afford better film stock and better lighting.

While the titles are vastly inferior to the original, they both mark important moments in the Jason Voorhees lore. In the first sequel, flat characters rehash the original story. However, Part II is significant for the first appearance of a grown up Jason Voorhees. Sure he wears a bag on his head, but it’s quite a creepy and effective character design nonetheless.

Though Part III features more 3-D gimmicks then you can shake a stick at, including characters yo-yoing towards the camera, the schlock is worth trekking through to discover how Jason came to find his notorious hockey mask. It may not be much of a movie, but Friday the 13th 3D is a historic moment in pop culture history.

Also available this week is the next three installments on remastered DVDs. Part IV: The Final Chapter is arguably the best of the original series, featuring a bald Corey Feldmen and Crispin Glover acting around legendary Tom Savini’s special effects work. Part V: A New Beginning takes a bit of the supernatural away from the franchise, trying to put a real face behind Jason’s mask. Part VI: Jason Lives continues the three-movie arch, resurrecting Jason Voorhees into a zombie-like killer that would last for another four-movie string.

Each title also includes a piece of the mockumentary “The Crystal Lake Massacres Revisited”. Broken up into three parts over the three DVDs, the hour-long special feature examines the murder spike at the notorious camp during the 1980s. Well worth a look for fans