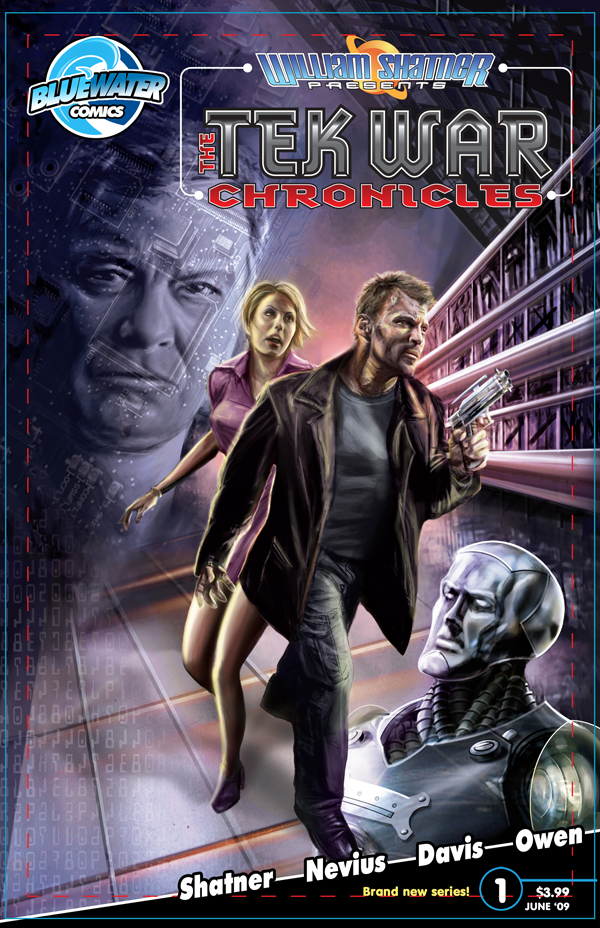 The TekWar Chronicles, a new comic book series based on the best selling TekWar novels by television and movie icon William Shatner is scheduled to arrive in stores on June 24th.

It is the first title to be released under the creative partnership between Shatner and independent comic book publisher Bluewater Productions announced last September.

“What an exciting event: The TekWar Chronicles – full of intrigue, mystery and sex…my favorite subjects. I hope you like it as much as I do,” said Shatner.

The first volume of the ongoing monthly title, penned by Shatner and Bluewater writing veteran Scott Davis, is loosely based on the original 1989 novel. It follows the story of a disgraced 22nd century police officer who is mysteriously released from prison for a crime he is certain he did not commit. Finding himself lost in a world changed since his incarceration, the no-holds-barred hero, Jake Cardigan, tries to put his life back together only to be lured back into the dark world of a digital drug called Tek.

“The book is not only for people who enjoyed the TekWar novels and TV series said Davis . “I think we’ve created an intriguing new mythology based on the books that any fan of science fiction or detective noir will enjoy.”

According to Davis, the new series is grittier than any previous incarnation of the franchise. “Whether you call it an adaptation, a reboot or a re-imagination, what readers will find is enough of the source material to make it very recognizable, but there are plenty of fresh new turns and twists to keep everyone guessing,” he added.

To capture the darker mood and ambience of the book, Bluewater turned to Nashville-based artist Erich Owen to provide the pencils and inks while Michelle Davies added the colors.

Although it will tell a serialized story, each volume (four issues) of the TekWar Chronicles contains a complete story arc. Fans will recognize the familiar themes Shatner infused in the original novels: loss, faith, redemption, injustice, frailty hidden by a facade of strength.

“What we have is a recipe for great drama and strong storytelling. It certainly comes across on the pages,’ said Bluewater Productions president Darren Davis.

Prior to the series release, an original 12-page prequel story introducing fans to the updated Tek universe was distributed for Free Comic Book Day last May. Over 10,000 copies were given away. Shatner signed more than 500 copies during one event in Los Angeles.

Tek War is the first of four separate properties Shatner and Bluewater are scheduled to produce. Other Shatner novel franchises including Man o’ War and Quest for Tomorrow will also be adapted by Bluewater as limited series releases. Shatner is also currently developing an original story for titled Chimera that Bluewater will publish.

Davis has written several titles for Bluewater Productions including “Ray Harryhausen Presents: Wrath of the Titans,” “20 Million Miles More,” “War of the Elementals” and “Orion the Hunter.” He is also a contributor to the Vincent Price Presents anthology series and the author of the upcoming Al Gore biography comic for Bluewater’s Political Power series.