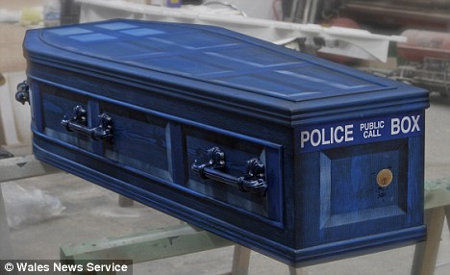 Wales’ Sebastian Neale loved “Doctor Who.”  How much you ask?

Attendees to the funeral were greeted by the a line from the fourth Doctor story, “Pyramids of Mars,” saying, “I’m a Time Lord, I walk in eternity.”  And the usual comforting words from scripture were replaced with William Hartnell’s first Doctor speech from “Dalek Invasion of Earth” and later re-used in the prelude of “The Five Doctors,” saying, “Someday I shall come back, yes I shall come back.  Until then there must be no regrets, no tears, no anxieties. Just go forward in all your beliefs, and prove to me that I am not mistaken in mine.”  (The original clip is include below)

Attendees also heard the famous “Doctor Who” theme played during the ceremony (no word yet on which version was used.)

"Outside In": Pop Culture Guides Editor Stacey Smith?
The Doctor's Finest: A Collection of Modern Classics
"Doctor Who" Christmas Special Heading to Theaters for First Time
How Caitlin Jenner Changed My Mind About "Doctor Who"